If anybody hasn't seen the magnificent Peter Sellars film about the day that the Grand Duchy of Fenwick invaded the US and won, then they should. Alternatively they could also follow the extraordinary goings on on the tiny Åland islands.

These semi-autonomous islands first came to prominence during the ratification procedure of the European Constitution when they went to the wall to allow themselves the right to continue chewing on Snus – a strange tobacco teabag enjoyed by some of our Scandic friends. The point being that Snus is banned throughout the EU, except in Sweden where a derogation was granted. The people of the Åland islands are pretty Swedish, particularly when it comes to Snus.

Brussels is trapped in a "Catch 22" situation of the EU's own making. Snus, a form of chewing tobacco, has been outlawed by EU fiat in every nation except Sweden, which secured a -special opt-out as a condition of its joining the EU, and in every region – except Aland.

The Commission recently took Finland to court to quash Aland's snus law. But Finland has no power to change that law. Finland does not control laws covering health in Aland; Aland does.

Aland is not allowed to defend its law before the justices in Luxembourg because the court recognises only nations. So the court is set to convict and fine Aland, without allowing the island's government to plead its case. 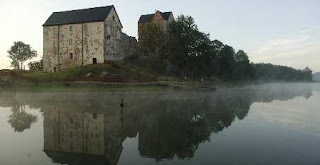 Well it seems they are up to their old tricks and are creating a treaty constitutional headache for the Government in Helsinki. Ever since earlier this year the snus problem has been looming large for Finland's ratification of the Lisbon Treaty (in a country which it must be remembered only 34% see the EU in a positive light according to the latest Eurobarometer [pdf]). It is now coming to a head.

The local government in the capital Mariehamn has said it will ratify the bloc's latest institutional rule book only if it gets the nod for four demands, with the vote in the Aland 30-member strong parliament expected in the autumn.

If a place with a mere 26,000 inhabitants can fight for its interests, why cannot a country of 60 million?

It was perhaps because snus could still be sold in Sweden that Swedes voted 'yes'. Without snus I'm quite sure that Sweden would have remained outside EU.

I remember reading that snus was banned originally, because the EU wanted to do something about smoking. They would not do that but banned 'snus' instead, since the stuff was not widely used within the EU countries of the time. The issue came up again when Sweden started negotiations about membership.

'Snus' is also widely used in Finnish mainland. But Finland did not negotiate any provisions for the stuff, so selling of 'snus' (wet snuff) was banned as soon as Finland became a member.

Snus can still be bought from ferries that sail between Helsinki and Stockholm. In addition, there is a significant black market surrounding the stuff. In the Swedish speaking areas 'snus' used to be sold quite openly in service stations and kiosks until the police cracked down on the sellers more than a year ago.

Why does Brussels want to ban this?  Certainly no more harmful than smoking and it looks like much less so.  Incredible.  I think people are finally getting tired of this.

What is the price of freedom? How is it that some are just hell-bent to micro-manage our lives?

Be aware of the fact that Peter SellArs is a wellknown American theatre director whilst Peter SellErs is - or was - the actor.