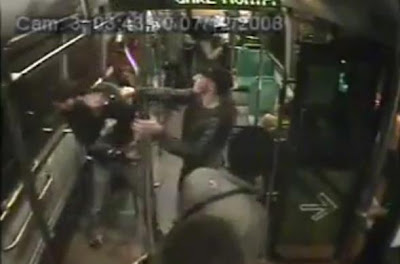 A six-minute video from a surveillance camera, showing an attack on a young white man in a Parisian bus, during the night of December 6-7, 2008, has aroused a tsunami of reactions throughout the French-language Internet. At François Desouche there are almost 2000 comments to the video, not to mention other sites.

The reaction was so overwhelming that censorship of the video by both Daily Motion and YouTube was easily foreseeable. FDS decided, therefore, to use a Russian version on RuTube. Click here to view the video.

The reason for the explosion of reactions, most of them expressing outrage at what happened on the bus, is that this is a racist attack by dark-skinned individuals (whose faces are visible) on a white man. Since the French State vigorously opposes racism "in all its forms", it remains to be seen if this crime is ever designated as a "hate" crime against a white man.

Some were shocked by the video because the faces were visible – normally this is not permitted. Hence the censorship of the video.

You will see a young white man with a plaid scarf. As he stands there the others on the bus appear to be talking in an agitated manner. You will clearly make out a young black male in a white hooded sweatshirt. Not everyone on the bus is black – there are white girls and men of various hues: it isn't always easy to discern their features. However, what is clear is that at one point, the young man with the scarf is robbed by the guy in the sweatshirt. When he attempts to retrieve his possession, he is grabbed and beaten by the thief and another black guy – big and muscular, wearing a black jacket over a white hooded sweatshirt. Then it looks as if a gang of thugs come together to beat the young victim as he lies on the floor – in the back of the bus. It also looks as if some passengers, including girls, try to help him. Chaos reigns as many try to get off. A girl attempts to make a call on her cell phone. It is clear that at one point another man is punched - he finally sits down (on the left side of the screen). Notice that when they punch they first spit on their hands. The two principal assailants, and others who participated in the beating, run off the bus. The young man arrives beaten and visibly shaken at the side of the bus driver (a white man) who seems to be totally indifferent to the suffering of the victim. Please note that the driver may not have been indifferent, but it is difficult to decipher his thoughts from the video. Also, the audio portion is not clear - there is yelling and screaming, and insults, but specific words are hard to make out.

Here is the official report from the Ministry of the Interior (from a Google cache):


During the night of December 6-7, 2008, a passenger on the Nighttime Bus of the RATP (Parisian Transport) was the victim of a theft committed by several individuals, one of whom went through his pockets while another tried to distract him. When he tried to retrieve his possessions, he was violently thrown on the ground and severely beaten by four individuals.

Since the bus driver had called for help, officers of the Regional Transit Police arrived quickly on the scene and arrested R. and Z. The latter were found to be in possession of a cell phone that they admitted came from another theft committed earlier. The owner of the cell phone formally identified the two perpetrators.

An examination of the surveillance camera images allowed authorities to determine the violent role each one had played, and to distribute photos of the two other perpetrators now at large.

Having confessed, R. and Z. were turned over to the Paris Tribunal while awaiting the judicial investigation.

On December 11, at 11:00 p.m. a patrol of Regional Transit Police, after viewing the images, recognized, on subway line 4 at the Saint-Lazare station, one of the two co-assailants at large, A., who was immediately arrested and is now in custody.

But... How did the video get on the Internet? Here are excerpts from a report in 20 Minutes (which had to close comments due to excessive traffic).


It turns out that the video was put on line by a policeman, who was arrested (and released) for his action. It also turns out that he was subsequently suspended on Thursday afternoon from the Regional Police. He will soon appear before a disciplinary committee.

He had put the video on his Facebook page on December 17, but the police refuse to divulge his identity.

Two investigations are in progress: one, to punish internally the guilty police officer, and the other, in response to a complaint filed by the RATP for "theft of images" and "harm to the image" of the RATP itself.

For Pierre Mongin, president of the RATP, "broadcasting the video on the Internet is a criminal act."

French readers may be interested in this article from Le Figaro that confirms the authenticity of the video thought at first by some to be a fake. Le Figaro also explains that it could not post the video before first blotting out the faces.

The photo above shows a passenger (not the one in the scarf) being punched.

Very sick. Imagine 10 years from now when a subset of these guys are ready to scale up operations from subway muggings to bigger things.