It is easy to terrorise people. Just tell them that you will kill them and most people tend to shut up. Sometimes it does not work. This is the case with people who have made the motto of the great state of New Hampshire – “Live Free or die” – their own.

“Terrorism only works when people agree to live in fear,” a Brussels Journal reader wrote to me last week. She is not entirely right. Terrorists have a fall-back strategy when dealing with brave people who value freedom above their own lives. The terrorists just threaten to kill others. Indeed, it is one thing for the morally upright to stand for their own principles and be prepared to die for them, but quite another to realize that others will have to die for them. Many heroic people are tender-hearted, but the terrorists are neither. The real martyr is prepared to die so that others may live free, but not to let others die so that he may live free.

Last week it looked as if the threats of Muslim fanatics against European media defending their freedom of speech might have strengthened the latter’s resolve. Now that the fanatics are taking it out on Christians in the Middle East – killing priests, torching churches and taking Lebanon to the brink of civil war, all because of twelve drawings in Denmark – people are beginning to wonder whether our freedom is worth the lives of all these innocents. Perhaps the answer is “no.”

If the answer is “no,” however, a few conclusions should be drawn. First of all, forget the talk about Islam being a “religion of peace” and the arguments – also heard in our comments section – that Muslims would never attack Christians, never destroy churches, never burn bibles, never smash images of the Virgin Mary or of Jesus, because, they say, Jesus is also their prophet and they respect all religions.

Here is an e-mail we received today:

salam is what we say before talking. its mean peace for all. so alsalam alykom. we are muslim and we are totally angry about what happened. we respect all religion and we dont insult anyone what ever he or she beleives of. so am so upset and feel anger cause i really like denemark but now totally i don’t. i hope u`ll stop and apologize about what happened. we start and end of this word salam all. so salam all

If we were to adhere to the same type of peace (salam) as some Muslims do (let us hope only a minority) we would now be “totally angry” about what is happening to priests and churches in the Middle East, we would ask Syria and Turkey for apologies, and – if we did not get them – we would burn the Syrian and Turkish embassies to the ground, kill at least one imam and destroy a few mosques.

I am quite willing, however, to accept that the majority of the Muslims are moderates, that they are being terrorised by the radicals, that they do not condone the crimes currently committed by the radicals but that they are too frightened to speak out. Though there is evidence contradicting this (namely the fact that only last month in free and democratic elections in Palestine this so-called moderate majority voted overwhelmingly for… the terrorists) I remain willing to accept that the majority are moderates. Even then, however, the simple fact remains that those who are now reacting so violently to the twelve Danish cartoons make it quite clear by their violent reaction that they are only insulted because the cartoon of Muhammad with a bomb under his turban mirrors their own (not necessarily my) view of Islam: a religion of revenge, terror and bombs. “Above all else, the Devil cannot stand to be mocked,” C.S. Lewis said. Lewis was wrong: Above all else, the Devil cannot stand to be shown his own image. It is the truth that hurts.

The second conclusion to be drawn from the present cartoon case is that Europeans are apparently no longer free to do and say in their own countries what they want to do and say. The Danish cartoons were not published in a Muslim paper. They were printed in a privately-owned, regional newspaper in rural Denmark, addressing Danish subscribers, to illustrate an article about the freedom of expression in a multicultural society with a Muslim minority within its borders. The article and the cartoons were initiated by the complaint of a Danish author that he could not find an artist to illustrate a book about Muhammad. European media republishing the cartoons did so, not to insult Muslims but simply to inform their European readers and to allow them to make up their own minds about how “insulting” these drawings really are. The Brussels Journal, too, is not a website addressing the Muslim world, it is a European website, as its name indicates, about European (mostly EU) affairs. Saudis and other Muslims are welcome to read it, but not to tell us what to do or not to do. However, what did we receive in our mailbox during the past week from so-called adherents of “the religion of peace”? Death threats, pictures of burned bodies, and warnings to shut up about the cartoon case.

Today, we received the following e-mail from a Muslim, and though at least he does not threathen to kill us, he nevertheless wants us to shut up:

Kindly note that its not appropriate at all to talk about the matter of those shameful comics this much and to try to open this subject to discussion. i m a muslim and i m proud of being so, i m not a terrorist, i m not thinking of killing any body, i just want to be left to live in peace and thats whats mentioned in Quran.

We, too, want to live in peace, but for the short time that we, Europeans, still have before the era of Eurabia, we want to do so in our land according to our rules, not those of islam. Jyllands-Posten wondered whether this was still possible in a country with a Muslim minority. It found out that when a country has let in a Muslim minority it has let in the Muslim majority from the rest of the globe. Today Muslim radicals set the Middle East on fire, bullying their religious minorities, because we dare to “disrespect” them, our religious minority (which our political leaders have so foolishly allowed to enter our countries), by printing mild cartoons in our newspapers.

It is 1933 again and the SA is marching in Europe. This time they are not shouting “Heil Hitler,” but a creed I will not quote for fear of provoking them to kill a poor priest somewhere in Turkey, Palestine or Lebanon. Six years from now it will be 1939 and our future looks bleak. A war is about to begin, but Europe is in even worse shape than it was in the 1930s. It will not only have to overcome its islamofascist enemy, but it is dying because, when it lost its own religion about two decades ago, it embarked upon a protracted suicide by ceasing to procreate. The coming of Allah to a continent with an increasing population of elderly natives is inevitable. The young Muslim hordes are arrogant. Who can blame them? They smell victory. The Danish cartoon case shows us what deep down we know is going to happen. Soon we will be slaves. Christianity has left a religious vacuum in Europe and Islam is filling the void.

Another Muslim wrote to us today:

i am a muslim. peace be upon you firstly. prophet mohammed not only mercy for muslims but else for all the world and there is a difference between press freedom and the lack of freedom, we can not as muslims assault the christ because Islam orders us to respect all the prophets so we are better than you finally you are a part from the true concept of freedom. ISLAM IS COMING

It sure is. Europe has only itself to blame for this disaster. As if to make this clear the renowned Belgian cartoon award of the international “Knokke Humor Festival” yesterday awarded its first prize to a cartoon depicting a yawning Christ above the bed of an elderly couple lying with their backs to each other. Asked for a reaction to this cartoon, the Archbishop of Brussels, Belgian Cardinal Godfried Danneels, communicated through his spokesman: “We should be able to laugh at ourselves from time to time so that we do not take ourselves too seriously.” 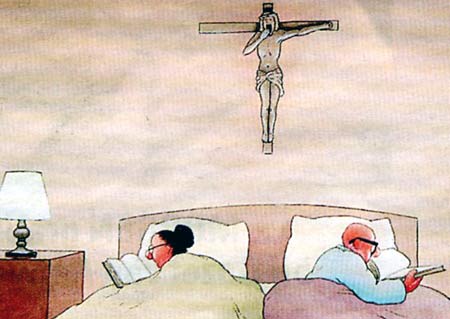 Asked whether this self-relativization does not apply to Islam and the Danish cartoons, the Cardinal’s spokesman told the press: “One does not mock the essence of someone’s faith. It is forbidden to depict the prophet. If you do, what’s more with a bomb in his turban, then that is a provocation. Just look at the violent reactions. The cardinal does not condone this violence, but he believes our own freedom has its bounds.”

The Belgian Cardinal would be the perfect bishop for Christian dhimmis in the Muslim continent of Eurabia. We are in the closing years of the pre-Islamic era of Europe’s history, and The Brussels Journal is there to record them – so that America may hopefully gain some insights from this and learn from our fatal mistakes.

More on the cartoon case