caused a stir in the Danish media yesterday when she said in an interview with the tabloid newspaper B.T.

that she suppors the «resistance» movement in Iraq and has no problems with Danish troops being attacked. Asmaa Abdol-Hamid plans to run for the extreme-left Red-Green Alliance (Enhedslisten) in the next elections for the Danish Parliament (Folketinget). 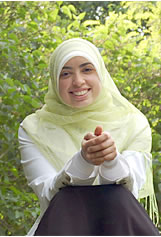 Asmaa Abdol-Hamid told B.T. that «she supports the Iraqi resistance movement against the occupation forces» and that «they have the right to live in a country where they can make their own decisions». She therefore does not want to distance herself from Iraqis using weapons against Danish forces in Iraq either. In a reaction to the controversy which her interview started, she maintains her support for the Iraqi resistance, and even goes as far as to compare them to the Danish resistance movement against the German occupation during Second World War. She thinks resistance against a foreign occupation is not only legitimate but even a human right.

, the founder of the new conservative political party New Alliance (Ny Alliance) said in a reaction that Asmaa Abdol-Hamid is a confused young woman who has already said so many things and contradicted herself numerous times. He points out that she is completely wrong in this case, since the Iraqi government is legitimate and recognized by the United Nations, and therefore should be supported over the resistance movement. Other politicians from other parties agreed with Naser Khader.

Asmaa Abdol-Hamid was backed up by her own party, the Red-Green Alliance, with Frank Aaen

, MP for that party, saying that in Iraq, combat against amongst others Danish soldiers is legitimate. He adds, however, that he is against terror in general, and assumes Asmaa Abdol-Hamid is too. The Danish imam Abdul Wahid Pedersen, who backs Asmaa Abdol-Hamid's candidacy for the Danish Parliament on the Red-Green Alliance's list, supports her too, saying he still thinks she'll make a good Danish MP. According to him, what she has says is not controversial at all.

Asmaa Abdol-Hamid came to Denmark as a Palestinian refugee in 1986 together with her family. She is a social worker and first made national headlines when she refused to shake hands with a male colleague after she was elected as a deputy member of the Odense city council in 2005 for the Red-Green Alliance. Later, she was the spokesperson for 11 Muslim organizations acting against Jyllands-Posten in the famous cartoon controversy,. In 2006, she hosted a TV show called Adam and Asmaa on public television, together with journalist (and atheist) Adam Holm. That show caused a debate, too, since she wore a hijab, thereby being the first TV host on Danish television to do so. She has already announced that if she gets elected for the Danish Parliament, she will wear the hijab in Parliament too.

In the interview with B.T. she also said she has never had any boyfriend, but she has already said no to many men. She doesn't know what the perfect man for her should be like, but for her, the more important question is how she'll meet him – e.g. through «the traditional way where another family knows her family, and she can learn to know their son».

That treasonous, ungrateful shrew should be chained to a post somewhere at the Arctic Circle where there is a sizeable Polar Bear population.

Talk about a religion being flexible.  It is my given understanding that women are to have no opinion except what their husbands give them but they certainly have no vote.  Why this change?

Yes, this Muslim religion is quite convenient.  Obviously the rules in Islam are quite flexible. The opinion that it is ok to shoot people who are there to help only underscores the convenience of the people who hide behind their so called religion.  People like this need to be sent back to Afghanistan or in this case Palestine ( which never existed as an actual place) because Denmark is not good enough for her.  She can also take 100.000 or her closest friends with her.

Taking the photo into consideration, it's hardly surprising "she has never had any boyfriend"

Personally,I'd be more than happy for readers of the Brussels Journal to take the time and effort to read Finkelstein.Having done so,I would then urge them to take up the following challenge:

He assumes that readers will not have read the material he criticizes,because if they did,they would not recognize his characterizations of them.Indeed I CHALLENGE ANY REASONABLE READER TO PERUSE MY WRITINGS AND THEN FINKELSTEIN'S CHARACTERIZATION OF THEM AND DECIDE WHETHER HIS CHARACTERIZATIONS ARE EVEN CLOSE TO WHAT I ACTUALLY SAID. (emphasis added).

As an impartial observer,and a supporter of free speech,that sounds reasonable enough to me.

How MEMRI presents itself

[From the MEMRI website:]
The Middle East Media Research Institute (MEMRI) explores the Middle East through the region's media. MEMRI bridges the language gap which exists between the West and the Middle East, providing timely translations of Arabic, Persian, and Turkish media, as well as original analysis of political, ideological, intellectual, social, cultural, and religious trends in the Middle East. Founded in February 1998 to inform the debate over U.S. policy in the Middle East, MEMRI is an independent, nonpartisan, nonprofit, 501 (c)3 organization.

The truth about MEMRI

MEMRI is a main arm of Israeli propaganda. Although widely used in the mainstream media as a source of information on the Arab world, it is as trustworthy as Julius Streicher's Der Sturmer was on the Jewish world.

MEMRI recently posted what it alleged was an interview I did with Lebanese television on the Nazi holocaust. The MEMRI posting was designed to prove that I was a Holocaust denier. Below I juxtapose the MEMRI version of my interview (both the actual broadcast version as well as the transcript it prepared) against what I actually said in the interview. http://www.normanfinkelstein.com/article.php?pg=11&ar=605

Your humo(u)r appears to have turned decidedly British.Have you been on a recent furtive trip to Blighty by any chance?

"Before Islam,the Arabs fought for 40 years to defend the honour of a female camel.This was in the Busous War...".

NB This event should NOT be confused with Islam's own "Battle of the Camel".

From Kapitein "I saw her picture. She is flattering herself by thinking that men stare at her in a sinful way...perhaps Muslim men do... "

She looks like a camel.  What are you implying here?

Adam and Asmaa,lachrymose Reaney and the secularism society.Does anybody else see a pattern developing here?

"Asmaa Abdol-Hamid came to Denmark as a Palestinian refugee in 1986 together with her family."

Currently she expresses her admiration for and thankfulness to Denmark by supporting the deaths of its soldiers.

"She is a social worker and made first national headlines when she refused to shake hands to a male colleague after she got elected as a deputy member of the Odense city council in 2005 for the Red-Green Alliance."

I saw her picture. She is flattering herself by thinking that men stare at her in a sinful way...perhaps Muslim men do...

"She was later the spokesperson for 11 Muslim organizations acting against Jyllands-Posten in the famous cartoon controversy..."

So she will not object to families of war veterans vandalizing her property and calling for her execution as a traitor then?

"She has already announced that if she gets elected for the Danish Parliament, she'll wear the hijab in the Parliament too."

Perhaps she should wear a g-string to Parliament instead, which will really force men to avert their eyes and think nothing of lust.

*Browning refers to the colonization of Western Europe, including Denmark, by non-European peoples of which Muslims form a significant portion if not the majority, and thus it is related although not quite synonymous with Islamization

**Though the Pashtuns, from which the Taliban were derived are the largest ethnic group in Afghanistan, they do not make up the majority of Afghans; in fact the majority of Pashtuns worldwide reside in Pakistan. It has been argued that the Pashtuns expanded their numbers northwards with Pakistan's assistance (not unlike the ethnic Albanians now residing in Kosovo, a former ethnic Serb territory until Hitler's reprisals), fueling Afghan-Pakistan feuds that were in part behind Pakistan's support for covert and overt American intervention during the Soviet occupation.

"Asmaa Abdol-Hamid...even went as far as to compare them [Iraqi insurgents] to the Danish resistance movement against the German occupation during Second World War. She thinks resistance against a foreign occupation is not only legitimate but even a human right."

I would venture so far as to compare the Islamisation and 'browning'* of Denmark to the Wehrmacht invasion and occupation as well, although it would probably be more comparable to the Germanisation of various Western Slavic (e.g. Polabians, Sorbs) and Baltic peoples (e.g. Prussians) when Drang nach Osten was in effect. I also agree that resistance against foreign occupation is a natural and should be a legal right, however, I am certain that myself and Ms. Abdol-Hamid would strongly disagree as to who is the "foreign occupier" and where this occupation is taking place.

"Asmaa Abdol-Hamid was backed up by her own party, the Red-Green Alliance, with Frank Aaen, MP for that party, saying that in Iraq, combat against amongst others Danish soldiers is legitimate. He adds though that he's against terror in general, and assumes Asmaa Abdol-Hamid is too."

Firstly, there is no "legitimacy" with regards to war, the Geneva Convention and international co-operation notwithstanding. Given that in theory each nation-state or state is sovereign and does not recognise any supranational authority, the latter does not exist to the extent that it can truly legitimize or de-legitimize warring factions. Though I accept that Mr. Aaen holds his committment to his beliefs to be superior over national or tribal loyalties, his rather treasonous declaration does not render the fighting "legitimate" either way. Secondly, though I will not comment on Danish involvement in Iraq, I will state that those Danish personnel serving in Afghanistan: (a) were invited by the internationally recognised Afghan government, (b) have the popular and military support of many Afghans (incl. the former Northern Alliance), and (c) are combating an enemy that is foreign-controlled and manned, by Pakistan in particular**, which had only usurped power because of the chaos wrought by the 1979 Soviet intervention. If Mr. Aaen is truly "against terror in general," than he should be against the Taliban and the Pashtuns on either side of the Afghan-Pakistani border that support them.

"The Danish imam Abdul Wahid Pedersen, who backs Asmaa Abdol-Hamid's candidacy for the Danish Parliament on the Red-Green Alliance's list, supports her too, saying he still thinks she'll make a good Danish MP. According to him, what she has said isn't controversial at all."

Who said Muslims don't disagree and don't have a diversity of opinions?

"Isn't nice to hear from the future of the Denmark!"

I surely hope this is a wake up call to the Nationalist, of all countries. Theocracy is a coming!!

"Isn't nice to hear from the future of the Denmark!"
Don't worry. Denmark will definitely be the last nation in Europe to surrender. This Asmaa-fool is a member of our political asylum called Enhedslisten (Unity List). They are constantly on the verge of sliding out of parliament, representing no more than 2.6% of voters. She is actually an asset for Denmark: we tend to laugh at most everything, but this time even our most ridiculous useful idiots (yes, we have a fair share as well) are keeping a very low profile. Hell, even our Danish Broadcasting Company - competing with the BBC in foolishness - is embarrassed.