The children of immigrants are the largest threat to Danish society, says Torsten Hesselbjerg

, head of the Danish police, in an interview with the morning newspaper Jyllands-Posten

. They are responsible for the heaviest forms of crime, drugs dealing, but for them, honor, prestige and power are parts of the game too. 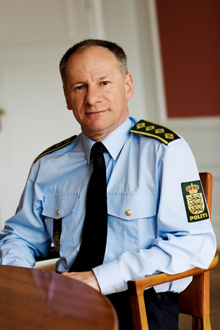 Torsten Hesselbjerg has been the head of the Danish police since 2000, as the so-called rigspolitichef. In an interview with the Danish newspaper Jyllands-Posten Saturday morning he says that a list of 141 names forms the largest challenge for the Danish police right now, but young migrants worry him the most as he sees them as the largest threat to order and rest in society.

These young migrants commit all sorts of heavy crime, but focus particularly on drugs. However, for these people, concepts like honor, prestige and power are part of the game too. Right now, Danish police tracks fourteen criminal organizations with a total of 141 members at «level 1», a term the Danish police uses for the most influential and active criminals in the underworld of organized crime. According to a police report, these criminals have access to weapons and explosives, and are prepared to use both of them in their struggle to keep control over the drugs market and to maintain their own version of honor.

) were hit particularly hard at the end of 2007 and in the beginning of 2008 by shootings and unrest amongst migrants, but no persons at «level 1» were involved in these incidents. Both Nørrebro and Københavns Vestegn are housing large groups of migrants.

Not only young migrants but also organizations like the Hells Angels and Bandidos participate in organized crime, but at the same time, these groups have come more and more under pressure from young migrants. This is one of the reasons why the Hells Angels recently have started a new group, A81, recruiting mostly among younger people.

Finally, Torsten Hesselbjerg thinks that the largest challenge for the Danish police next week will be to prevent young migrants from setting fire to the streets in Denmark again during the Easter school holidays, just like they did during the last school holiday in February.

So,based upon the sum of that same statistical data,it could be argued that if the (children of) immigrants were to be taken out of the equation,overall crime in Denmark would actually be on the decline.Thanks,kappert,I'd never actually thought of looking at the problem that way until you pointed it out to me.

Torsten Hesselbjerg delivers his personnel opinion that young migrants worry him the most. More scientific approaches show another reality. A Danish investigation shows that criminality among people suffering from schizophrenia has been increasing by 6.8 per cent a year during the past decades. The cause has nothing to do with a general increase in criminality in Denmark. On the contrary. The number of punishable offences recorded has remained constant at around 520,000 annually, while the number of cases in which the offender has been sentenced to psychiatric measures has increased by 50 per cent. (www.mentalhealth.com)

The schizophrenia part is correct, the Moroccons think they are Danish, the immigrant crime count stays the same unless you count the crimes by schizophrenes as 2 crimes, one by a Moroccon, one by a Dane.

I've read reports that this stuff is reaching us from the Czech Republic. It doesn't matter too much, though, that's just an example. The conclusion - border control is good - applies also if Austrians, Germans, Dutch or any other was producing the stuff and sending it here. It applies to khat as well, which are plants and quite bulky to transport. We have a heavy problem with khat addiction among Somali immigrants.

Yes, crystal meth is trivially produced based on flu medicine, and that's a problem. If it grows, I think this flu medicine should be taken from the market, as the damage of crystal meth is far more serious than that of flu. The production involves some flammables, and meth labs are known to have a tendency to go up in flames from time to time. Unfortunately not frequently enough to provide a 'Darwinistic' solution to the problem.

You are perfectly right here, crystal meth is a drug relatively easy to make even home, once the drug become popular it's hard to stop it from spreading. US is already largely affected by the epidemic of crystal meth addiction and things aren't getting any easier despite all the anti-drug efforts.
Alanman, drug treatment counselor

HRC: Worse is methamphetamine, which seems to be coming to us from the Czech Republic, mainly. That stuff is ugly! Probably the best cure for this - and a great help for many other mafia related activities - would be to reinstate the permanent border control.

Methamphetamine use is not something cured by border controls. Indeed, it can be produced dometically in virtually every Western country, and while associated with criminal activity, can also be produced purely for personal recreational consumption. Nor is the Czech Republic considered any producer of note in the relevant literature.

"Well one thing that could be done is legalize drugs."

That makes sense, partially. The obvious first target would be heroin, which noone takes for fun anyway, and which has a real physical addiction. We're working on that in a limited program which I hope will go full scale in a couple of years. That will be a partial solution to the drug problem in the long term: No market, no pushers, no new addicts. Good.

Cocaine, on the other hand, is a distinct problem. Making this free would make the problem worse, not better. People take it occasionally for parites and such, and was it to be free, use would increase. One option is the vaccine being developed that renders the drug ineffective.

Worse is methamphetamine, which seems to be coming to us from the Czech Republic, mainly. That stuff is ugly! Probably the best cure for this - and a great help for many other mafia related activities - would be to reinstate the permanent border control. It is, after all, a lot easier to find a shipment of drugs at entry than when it's been distributed all over the city. Stopping Khat and human trafficking would be nice, too.

For the immigration related aspect, we jokingly call it "Cultural enrichment". That stabs at the heart of those leftie loonies who used to defend immigration at any cost. Now we're facing the cost, and it's ugly.

Does Europe really need these people? I can't possibly see why it needs anyone who will not obey its laws. Is there some real reason why we cannot go back to real punishment, and by that I mean execution, for much lesser crimes? There was a time when stealing a loaf of bread was punishable by death. I know that we think that we have "advanced" so much in our thinking today, but look what we have advanced to. If we began to dispatch these folks, so that caught once, they were permanently out of the picture and no longer a part of the problem, I think that we would have a lot fewer of them.

The only problem with this, I'm pretty certain, is the unwillingness of people at large to make hard judgments when the punishments are final as with an execution. Even in cases with multiple eye witnesses, judgment is influenced by the consequences, and so we are unwilling to act if it will result in a death sentence. So, because we are squeamish, we will have to put up with what we could be rid of if we had the courage to eliminate it.

Europe deserves what it is getting.

It's brave from him to name the cat a cat.

Well one thing that could be done is legalize drugs. It might cause other problems but they aren't so bad as it is now. The market would collapse and their profits disappear.

Unfortunately the problem lies even deeper. Yesterday a football referee was beaten into hospital by a whole team.. because he was 'racist'.
A while ago there was a similar event in the same area, where players and trainer of the 'racist' team were beaten into hospital.

This has nothing to do with organized crime, drugs (unless they're on coke,could be),.. imho their minds are just fucked up all the way!

The list is way too long. Also yesterday a man was attacked with a screwdriver (2 times stabbed in the face) after his girlfriend was also beaten, by an illegal without ID. He got caught.
Imagine if this is the other way around, the world would be too small to spread the news around. Now nobody knows, nobody cares, it's just a newsitem that lots of people accept as part of society.

One can rejoice in the shred of honesty remaining in Denmark. However, this confirms that the threat is ethnic and racial as opposed to socio-economic or the result of immigration-related culture clashes.

The settler societies of North America and Australasia were established with greater liberal democracy than was possible in Europe. Nevertheless, these societies relied upon European immigrants and could rest assured that Western values penetrated even the Russian steppes. Unfortunately, non-White peoples, Muslims in particular, have had centuries to absorb the developments in Western European political philosophy and remain as primitive as ever.

It’s a pattern one sees in prison as well, the most antisocial are for the most part pleasant to deal with and never get their hands dirty. Nevertheless, they are running the show and directly responsible for most of the violence that keeps everyone else in line.