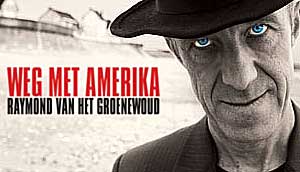 In his report on the anti-American hate lyrics of the Belgian songwriter Raymond van het Groenewoud Luc Van Braekel made the point that “more and more, it seems that racist or semi-racist expressions are punished when they originate from popular culture or from right-wing politicians and are directed against muslims, Arabs or Africans, but that similar expressions remain unpunished when they come from 'progressive' artists and leftist intellectuals and are directed against the Americans, the British or the Dutch”.

The sequel to this story proves him right. Quite a few people were indignant at the liberties taken by Mr. van het Groenewoud in his song “Down with America”. Flemish pro-Americans and American expats living in Belgium accused him of xenophobia. There were discussions on radio and TV and a number of people felt so insulted that they lodged complaints against him with the Centre for Equal Opportunities and the Fight against Racism, an institution which has been mandated by the government to defend those targeted by hate speech before the courts.

The Centre received twelve formal complaints. These, however, will not make it to the courts. The Centre contacted the singer and his manager, and the latter agreed to “explain” the song in an open letter to the public. The twelve complainants will receive a personal letter from the Centre. Its director Marco Van Haegenborgh says:

We understand that this song may shock or wound people’s feelings, but we do not think it contains any intention of hatred or discrimination, and it does not incite to violence. As far as we are concerned the case is closed. The twelve complainants will be sent a personal reply.

In this reply the Centre will explain to the complainants that its court actions against texts in publications of the former Vlaams Blok party (which led to its being condemned for racism in 2004 and hence outlawed) were inspired by the fact that “harsh criticism is allowed but one cannot disseminate just anything, not even under the guise of artist’s license, and that the artist remains ultimately responsible for content and form of his work.” The Vlaams Blok texts criticized government policies on immigration and asylum seekers. Mr. van het Groenewoud’s lyrics apparently qualify as legitimate artist’s license.

At the request of the Centre Mr. van het Groenewoud published an open letter “explaining” his lyrics. It reads like a communist pamphlet against America’s power and policies, its “imperialism” and its “fundamentalism.”

“I cannot see what I am being accused of,” he says. “I am white myself and I criticize the policies of mostly white Americans (…) I am not talking about American immigrants but about American policies, political, economic, cultural and military.” He claims that the expressions he uses “surely clarify what I mean in a poetically childlike manner” and that he employs the term “America” as a “symbol” of “power, abuse of power (for instance Clear Channel, CNN), lust for power (the Terminator syndrome).”

“About the sometimes crude and violent language: I wish to point out that I am using a swearing technique which I have drawn from an American cultural phenomenon, rap, a style in which vulgar and abusive language abounds (…) A taste of their own medicine, I thought, as I collected statements like ‘a hot poker up their ass’;”

His song includes the phrase: “down with those rappers and their never-ending f*ck!”

Mr. van het Groenewoud conveniently forgets that rap is not a white but a black American phenomenon.

The letter is accompanied by a remark from the Centre for Equal Opportunities and the Fight against Racism:

It is important to note that each artist is, and should be, responsible for content and form of his work. Obviously one can thoroughly disagree about the acceptability of the various ways in which one chooses to "amuse, shock, provoke or inform". People will have differing opinions on this and it is a good thing for a democracy that one can debate about these things.

I think I understand that many are upset that the CEOFR is not applying the law equally. They fail to understand that it is the job of the Centre to support those things leftist and harrass and intimidate those who are not leftist.

Where were you when it came into existence? It should have been obvious that is what it would do and would have been spotted right away by an American who has had to deal with similiar things for some time.

The main thing is that no one, except for your European elitists, probably ever knew that it was coming into being before it became an established front. Don't give it legitimacy by expecting it to be really fair! How do you expect to be treated fairly if you have no power to demand fair treatment? You have no right to make such demands on your leaders and that should be obvious to Europeans by now. You will soon be under an EU constitution and I doubt that you will have any voice once it is imposed on you, likely without your opportunity to vote for or against.

I think you are just beginning to learn how treacherous leftists can be. They not only blame you for being who you are but train others who think similar as you to treat you with disdain. I hope you learn in time for your own good.

That being said, I acknowledge that Americans still face that same thing, which became rooted into governmental and non governmental organizations during a forty year malaise following Viet Nam and the sixties. It is still an uphill struggle againt socialism and teletubbie media messages, but many people are finally learning the methods used against them and fighting back. I hope Europe can do the same. Europeans and Americans should be friends based on common backgrounds apparent in our histories and even in our geneology. Let's hope that leftism on either side doesn't destroy that.

what Freddie Krueger must have looked like when...he was still alive hahaha. The good part is Raymond CAN'T turn up in your dreams, fweew!

To our European friends we *red staters* say this: Don't Feel Bad.

Here in America we also have our share of *artists* who despise this Bush. From Alec *I'll move to France if Bush wins* Baldwain to the Dixie *we're ashamed Bush is from Texas* Chicks.

We also have the ones that hate America and all she stands for in general. From Barbra Streisand to Michael Moore through the majority of the Hollywood elite.

So thanks for sharing but we have our own garden variety idiots over here.

Anyone who reads LVB's blog please forgive me for repeating myself...

Well, it is official. I had the idea to do it myself and now regret I didn't get on board.

I love the fact that this is being influenced by the Vlaams Blok (oh, sorry...Belang). What a perfect platform to show the geniuses in the ministry how their laws can be twisted to serve the purpose of the person interpreting it. It is so ironic this song would have been allowed in America. Half of the music of Eminem should be brought to court in Belgium under this pretense. It is about time for them to admit they got a law made with the right intentions, but which is unworkable in practice.

What is the difference between a German and a Belgian?

A German will think about a law. Study it. See if it is a good law. Will test it and then go through a long process to adopt it. Once in effect, everyone follows this law because it makes sense.

A Belgian will think about a law. He will say "That's a good idea for a law.". He will put it immediately into effect. Then he will spend the rest of his life figuring out ways to get around it. :-)

Nothing surprises me anymore about the depth of what some of the enlightened (they truly believe) Belgians would stoop in order to ridicule America and make themselves feel superior. Remember the 'piss on Bush’ stickers placed on urinals here before his visit. So-called enlightened three (3) year old mentality. Their jealously of America and discontent with their own lives continue to show through with every vain attempt made.

I am not surprised by the judgement of the centre. In its political correctness uses it a double moral.

I very worried by the anti-americanism of the media that indoctrinises our people. Unfortunately there is not any broadcaster or journal (except Brussels j) that does something against this leftish nonsens.