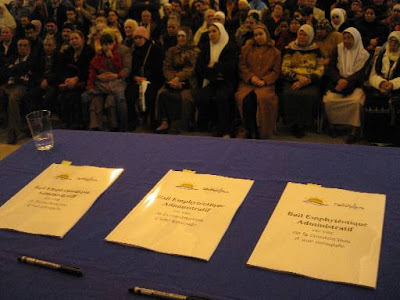 Both Le Salon Beige and Yves Daoudal have reports on the decision by the administrative appeals court of Versailles to allow a mosque to be built in Montreuil. The original court decision in 2007 banning the construction came about as a result of a suit brought by the MNR (National Republican Movement), the right-wing political party led by Bruno Mégret, who has since retired from politics. That decision has now been overturned:

Despite the earlier victory of the MNR in 2007 to prevent the Montreuil municipality from renting land for a derisory sum of money for the building of a mosque, the appeals court has ruled in favor of the department of Seine-Saint-Denis. The court said:

" (...) the annual rent of one symbolic euro cannot be considered, in the circumstances, as a disguised subsidy. (...) The constitutional principal of laïcité, which implies the neutrality of the State and collective territories (...) and equal treatment for all religions, does not in itself rule out the granting, in the general interest, of certain types of assistance for activities or equipment connected to religions."

The law on laïcité was passed in 1905. After that date church financing was in the hands of the parish. With the coming of Islam to France clever and devious loopholes have been found to allow the State to subsidize the building of mosques.


In a communiqué, the MNR denounced the trampling on the law of 1905:

(...) This decision, contrary in its essence to preceding judgments by several administrative tribunals, contrary as well to the jurisprudence of the Council of State, constitutes through its interpretation of the law a highly favorable advantage for the Muslim religion; for the MNR it now opens the path to all abuses and pressures from Islamic associations that henceforth will not desist from seeking land in every municipality of France (...)

Not only did the court reject the suit brought by Patricia Vayssière, of the MNR, but it fined her 1000 euros. This sum corresponds to a thousand years of rent! The elected officials have been duly warned: do not touch Islam!

The photo shows copies of an emphyteutic, i.e. long-term, lease. It has been by means of these leases that France has skirted the 1905 law.

It is pure hubris and arrogance that leads Westerners to believe they can allow Moslems to settle in Western lands.  Westerners believe their peoples and economies are so strong, and the principles underlying their institutions are so self-evident and universal, that deeply hostile and alien peoples no sooner set foot on Western soil than they are immediately swept up on an escalator that leads to enlightment, that is, to acceptance and even love of secular liberal-democratic ideology.

Our leaders are dreaming but our people pay the price.  Moslems in the U.S., the U.K., France, Belgium, Spain, the Netherlands, Norway, Sweden, Denmark, and Ireland are still Moslems, whose religion commands them to despise and dominate all non-Moslems on earth.   They have been fighting the West for 1400 years. More than a religion, Islam is really a political philosophy and an international political movement. When they are present in a country in microscopic numbers, they have no choice but to conform to the ways of the population around them and not to make a nuisance of themselves, which most Moslems in fact probably prefer. But when they reach a significant proportion of the population in any location, enough to determine the character of a neighborhood or to express themselves politically, then they have no choice but to engage in jihad until they either triumph (by exterminating, dominating, or converting all non-Moslems) or are defeated. Western countries should immediately terminate Moslem immigration, close their mosques, deport all alien Moslems, deport all Moslem citizens who are unwilling to renounce Islam, and supervise remaining Moslems as if they were Communist revolutionaries.

Sadly, the Law of Unintended Consequences' most vivid example will soon be visited on France. Thanks in large measure to the bitter treachery of Charles de Gaulle and Jacques Chirac, France will meet the most formidable enemy of its history. Self-inflicted wounds are often the most damaging, and the European--Arab Dialogue is no exception. It becomes the gift that keeps on giving, at least until the caliphate is established, and France morphs into something unrecognizable.