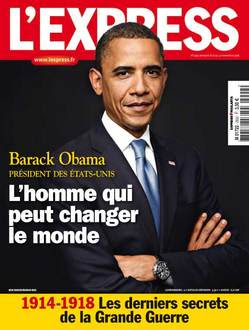 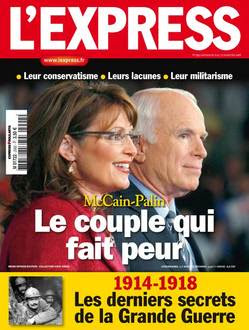 L'Express, one of France's leading news weeklies, similar to Time Magazine or Newsweek, was ready for anything. Two separate editions were prepared, with two covers. At the top we see the winner with the headline: Barack Obama: The man who can change the world. Below we see the alternative with this ominous headline: McCain, Palin: The couple that arouses fear; their conservatism, their failings, their militarism. (Source: Nouvelle Formule)

Whew! Thank goodness the gods were vigilant and the European press is happy! And aren't we all relieved to see iron-clad proof of the media's objectivity?

Oh, but wait. Here's a column by Jean-Michel Demetz published in the same L'Express that is ALREADY expressing doubts. Oh, please don't be a killjoy:


We almost hate ourselves for spoiling such a planetary festivity. Everywhere one goes, there is amazement and sheer delight. The election of a young, black president, sexy, moderate, intelligent, is dazzling the world.

Not since John Fitzgerald Kennedy has a democratic leader aroused so much hope. Everybody is identifying with Saint Barack just as, yesterday, everybody mourned Saint Diana.

Obama, or the mirror of our fantasies: the cursed and the powerful alike can project onto this awesomely telegenic image his or her hopes and dreams.

Such infatuation is touching. It's a strong bet however that this passion for Obama, from the Arab street that is now dreaming of a re-centering of Washington in the Arab-Israeli conflict to the French UMP party that welcomes this "rupture" (ha, ha, ha!), from the poverty-stricken dwellings of Kinshasa to the higher circles of Iranian power, will surely end in disillusionment, the hopes having been unattainably high. For politics has no worth outside the precinct of realities.

Rapidly, the world will learn that this man was elected to defend the interests of his country above all. It's fine if, for now, the universal order of the day is that what is good for America is good for the world. It remains to be seen how long this illusion will last.

Gone are the days when the media simply reported the news. Now they are able to choose our leaders!

A month before the election Mr. Sowell asked the question, "Do facts matter or is Obama's rhetoric and the media's spin enough to make facts irrelevant?" Sadly, the latter fooled a majority of American voters. As a result, the United States and the free world is saddled with a man we hardly know who came out of nowhere for the sole purpose of "change."

The American right wing is out of sync with the average European. The Democratic party is a much better fit for a majority of Europe's people and their political opinions. That's why Obama would win in a landslide in Europe. And I don't understand how conservatives in Europe believe they are equal to the Republican party. European conservatives aren't as extreme right wing as the average Republican.

Demetz' going after Obama for giving the world a little bit of hope of Americas goodness and proper stature in the world is ridiculous. If McCain would've won the presidency everyone would automatically have assumed that it'd be a continuation of the past eight years of Bush Administration policy. The only positive aspect of it would be that McCain would have only been able to fail upwards because has hit Bush rock bottom.

It is nice to see what the press does with it's freedom of speech , it expresses bitterness and bile against those it does not agree with . What happened to the press that reported events without bias and with fairness , or is this just another example of " change " that we must live with .

Is this what the left means when it talks about giving the benefit of the doubt?