Last week, the government of Belgium, a small European country of 10 million inhabitants, decided to grant official papers to illegal aliens who can demonstrate that they have “sufficiently integrated” into the country. The illegal immigrants must fulfill a number of conditions, such as having lived in the country for the past five years or having worked in Belgium for at least two-and-a-half years, having learned one of Belgium’s three official languages or having children at school.

The official papers will allow the illegal aliens to stay and work in the country. The Belgian authorities think the measure will apply to a maximum of 25,000 people. Previous estimates say the number of beneficiaries may range from 50,000 to 100,000 people. Belgian government officials, however, insist that the government’s decision is by no means a “mass regularization.”

The Belgian Cardinal Godfried Danneels welcomed the decision. The Belgian Catholic Church has been actively pushing for a new round of regularizations since the 2000 regularization which allowed 50,000 illegal aliens to become permanent residents of Belgium. By allowing, and sometimes actively encouraging illegal immigrants, who by Belgian law should have been expelled, to settle in churches, Catholic organizations tried to put pressure on the government. Even the Papal Nuncio, the Vatican representative to Belgium, expressed support for the church squatters.

On 20 July, the government of Belgian Prime Minister Herman Van Rompuy, a Christian-Democrat, gave in to the pressure. His junior coalition partner, the Liberal Party which had pushed for the 2000 regularization but had opposed another regularization with the argument that the Belgian welfare system could not afford it, approved the measure.

The Belgian regularization has drawn a lot of criticism from neighboring countries, as it affects them as well. Belgium is a member of the European Union. Under EU rules, people who legally reside in one of the member states, are allowed to legally reside in the other 26 member states as well. Belgium’s critics say that its legalization of illegal immigrants will lead to “social security tourism” in Europe.

France is strongly opposed to “mass regularizations,” although it too applies them from time to time. Italy is very critical as well. Last May, the Italian Chamber of Representatives passed a bill which makes it a crime to enter or stay in Italy illegally, punishable by a fine of up to €5,000 ($13,670). It also imposes a prison term of up to three years for anyone who rents housing to an illegal immigrant. Italy is trying to stem the flow of illegal migrants, even though in the recent past it too has regularized thousands of illegal aliens.

Politicians in the Netherlands, including members of Dutch Prime Minister Jan-Peter Balkenende’s Christian-Democrat Party, have also criticized the Belgian decision. The Dutch Freedom Party has even demanded that the illegal immigrants who have been regularized by the Belgian decision, be denied access to the Netherlands, although such a measure is impossible under EU legislation. In 2007, however, the Dutch government also applied a mass regularization involving 30,000 illegal aliens.

Amnesties for illegal immigrants take place at regular intervals in Europe. Each time a government grants one, they invariably say that this will be the last and that from now on all illegal newcomers will be expelled. Since 1974, Western Europe has given permanent resident cards to over 6 million illegal immigrants. France has granted three major amnesties in the past 25 years. Spain has offered six in the past 15 years. Italy voted amnesties in 1988, 1990, 1996, 1998, 2002 and 2006. All these countries belong to the European Union, where there is free movement of persons. An amnesty in one country allows the formerly illegal immigrant to move to other EU member states as well.

The largest collective amnesties have been granted in Spain, Italy, and Greece. These EU member states, which directly border Africa and Asia along the Mediterranean, hope that once an illegal alien has obtained his residence permit he will leave for more affluent welfare states such as Germany, Britain, or Scandinavia. The immigrants can legally emigrate to a Shangri-La elsewhere in Europe. And, indeed, most of them do.

During the French EU Presidency in the second half of 2008, Paris proposed an EU-wide ban on mass regularization, but this proposal was dropped during negotiations on a European asylum and immigration pact in order to win the necessary support of the Spanish government. Spanish Prime Minister José Luis Rodríguez Zapatero advocates regularization of illegal aliens for “humanitarian reasons.” It is one of the few topics where the far-left Zapatero government is in agreement with the Catholic Church. As many of those who are regularized in Spain move on to welfare states elsewhere in Europe, mass regularizations do not hurt Spain too much.

Nevertheless, politicians, such as Belgian Prime Minister Herman Van Rompuy, who claim that the regularization of illegal immigrants which they are granting today will be the final amnesty, should not be believed. Recent experience shows that amnesties do not close floodgates. They open them. Regularizing illegal immigrants attracts new illegal immigrants.

Allah Takes Over Catholic Church, 7 May 2006 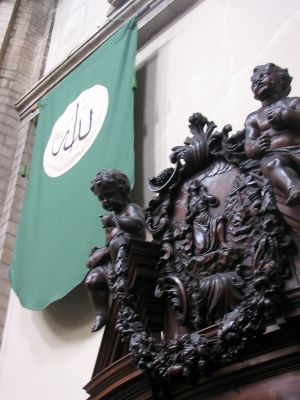 Amnesty for illegal aliens is yet another instance of Western states and societies permitting criminal and/or anti-social activities due to withering enforcement of existing laws and norms.  If the perpetrators appear likely to resist or retaliate, whether via violence or public relations, enforcement is avoided.  Yet the state imposes its power on those who do not pose a real threat, and society does likewise.

If state and society on the whole are unwilling to enforce laws and norms that comprise their own foundations, then they must surely collapse.  Or, if they are too "specialized" to do the "dirty work", then they must delegate these responsibilities to a group prepared to undertake them.  Sometimes, the cure can be worse than the disease, but those who abdicate responsibility abdicate power and authority, and are at the mercy of those who fill the vacuum.

No amnesty has ever been final, anywhere. Every time an amnesty is given, it encourages many more illegals to come, and the next amnesty will be larger than the one before.

If we stop to think about it, the whole idea of amnesty is irrational. It makes no sense to grant a general pardon to those who have broken the law to enter the country and plunder its social welfare system. That is just simply foolish at the heart of it. All it does is to "make the problem go away" for a brief moment, nothing more.

The mass invasions taking place in Europe and the US are clear signs of societal disorder. Nothing could be more plain in the Bible than the fact that God is a God of order. Every aspect of God's creation is ordered and hierarchical, not the chaotic mess that results when heterogeneous masses of people are mixed. God put each nation in its assigned place on the earth, and it was intended to remain there. It is absolutely wrong for massive numbers of people to move as they are doing today. Does Cardinal Danneels believe the Bible? Who knows? He is said to a be a liberal, so that cast some serious doubts.

No surprise here. The cardinal is a true liberal who tries hard to appease everyone, neglecting his duty as a self-professed Christian to spread the Gospel, lest the truth of Jesus Christ offend anyone! That is exactly why he has been so uncontroversial and popular. He reduces the Christian faith to a socialist praxis and takes away all of Christianity's substance. Yes, we are to be humane toward the immigrant, toward the persecuted, and toward the foreigner, but that does not mean there are no boundaries!

The problem is he does not see that God instituted the existence of different nations, languages, as well as the authorities that exist. Not only that, but the Word of Christ (of which he ought to be a minister) is a two-edged sword that brings division between those who repent and those who hate Christ and will remain dead in their sins.

The cardinal should preach the Gospel to the people of Belgium and to the sans-papiers, to the Muslims and other foreigners living here, and in doing so also remind them of the duty they have to submit to the proper authorities and to the laws of our nation, instead of babbling about tolerance and engaging in ecumenical nonsense - all of which is leading to the perversion of the rule of law and to the decline of our civilization.

Our God is a God of order and justice. Therefore we should condemn oppression and support the persecuted. But order and justice also necessarily mean that there are boundaries and that we are not to be self-destructive by being blindly tolerant and supportive of those who abuse and pervert justice and defy order themselves.