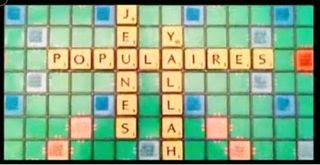 Nicolas Sarkozy's UMP party has a branch for younger members – "Jeunes Populaires". These young persons are "bright-eyed and bushy-tailed", trendy as today's news, oh-so-optimistic, and terminally adolescent (like Sarkozy himself?). A video has been posted at their website that gives an excellent idea of what they are about, but it also shows the ministers of Sarkozy's government as well as UMP party leaders engaging in a ludicrous political pep rally that can be qualified as an embarrassment at best, and voluntary prostitution at worst, without any fear of exaggeration. To watch key figures in the government behave like this should make us laugh, but in fact, it is nauseating, and if you really look at the underpinnings, terrifying. Especially on examining the words to the lip-synched ditty they jubilantly "sing" in our faces:

They are saying that the deeper the roots of the older culture, the more determined they are to pull them out of their native soil and transplant them – a reference of course to métissage, forced multi-culti, multi-ethnic relationships and a value-free, tradition-free, nation-free new society. We might add that it will also be a world without reference to excellence in art, music, movies and poetry. The teen-age mentality will rule. The "roundness" of the earth is taken as a sign that everything is borderless, open, and without restrictions, and that once these transplants get going, NOTHING and NO ONE can stop the process.

Joyous propaganda, bursting with "life", but underneath, a DANCE OF DEATH for France.

All who want to change the world, etc...

At one point in the video you will see what appears to be a scrabble board. On it, horizontally, is the word "populaires". Vertically you see "jeunes" and "yallah". "Yallah" is Arabic for "join us", but it also invokes Allah (Oh, God), as Bernard Antony explains. Moreover, the criss-cross implies inextricable integration.

You will also see a couple. She is pregnant, his hand is on her belly. Followed by a girl who lifts her tee-shirt to reveal another tee with the UMP logo. Even though she does not expose nudity, the gesture is unmistakable.

You will also see Sarkozy together with Obama. The video ends with Sarkozy's campaign slogan "Together let's change the world."

Will the political elite and associated bright-eyed and bushy-tailed adolescent camp followers of non-white ancestral homelands especially Muslim ones, be any time soon, adopting the same suicidal gameplan?

Somehow, I highly doubt it!

Not for another 500 years at least, I suspect!

The children will destroy the world and the grown-ups will watch in bewilderment.