If that isn't the creepiest nativity scene ever displayed! It's in Switzerland, of all places. Some Swiss cannot atone enough for the sins of their compatriots who voted against minarets, they have to offend, insult, and renounce the last glimmer of reason, the last concern for taste and the last faint flicker of national or religious identity. 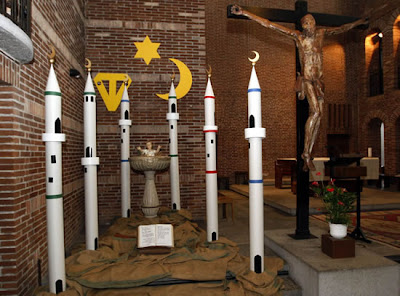 The picture originally arrived in my e-mail box, and I assumed it was PhotoShopped. Then I saw this article at Bivouac-Id. I really was surprised, though I shouldn't have been. It ranks with Jeff Koons Lobster hanging in Versailles as one of the craziest things ever done in the name of "art":

The creators of this nativity, which at the very least is unusual, declared that the fruit of their inspiration will bring to parishioners an opportunity to reflect on tolerance (!!!) and on Human Rights.

Installed near the main chapel, next to a large crucifix, six white towers two meters high topped with Islamic crescents surround a baptistery where the baby Jesus is lying. In front, an open book presents parallel quotes from the Koran and the Bible (...)

"We have received as many positive criticisms as negative ones," explain the artisans who created the scene, Matteo Casoni and Letizia Fontana, adding: "For us, it is already a success, since our goal was in fact to make people think and to urge them to ask questions especially at this time of the year. The idea came to us at the end of November after the vote against minarets." The two young artists point out that in no way do they share the opinion of 57% of their fellow citizens who want to ban such constructions.

Matteo Casoni, who is a member of the Sacred-Heart community, explains further:

Beyond the political aspects, we said to ourselves that we should encourage reflection on other religions and on their role. In our nativity, the three main monotheistic religions are represented; the Muslim, Jewish and Christian religions. The main message is that of comparison and of dialogue. (...) Saint Francis sought dialogue with Islam, without claiming to want to convert, but with the willingness to resolve a conflict in a peaceful way."

Letizia Fontana, a young historian who works at the Bibliographic Institute of Ticino (Italian Switzerland) believes that what she did is an act of civic commitment:

"Someone pointed out to me that this display does not respect the will of the people, making a clear reference to the referendum. But, for me, in a democracy, the minority has weight and especially in a case such as this one, I am part of the minority, and I have a duty to sensitize the population."

Father Callisto Caldelari, the Franciscan monk who is the priest of the Sacre-Coeur approved the display, which is part of a larger initiative to exhibit about forty different nativity scenes:

"We accepted all the creations, the only requirement being that they attain a certain artistic level. This year there will be more than forty nativity scenes: from the traditional to the one illuminated by ultra-violet rays, and the one with six minarets. Naturally, we only accept those that respect our spirituality, and in the case at hand, the fact that a nativity with minarets is in a Franciscan church only reinforces the message of peace and dialogue.”

"Yes! The most negative was precisely the one from the person who said that this nativity goes against the will of the people. I answered him in the following way: the popular will is not always ethical. Here, we speak of fraternity and of Human Rights."

Well, according to some Danes, that ought to be Baby Barack in the creche, not Jesus.

The Nativity is about Jesus Christ and Christianity, not Islam or Judaism.  The former arrived some six centuries after Jesus' birth, and the latter rejected Jesus and the religion that emerged after his death.  I will not dwell on contemporary inter-faith relations, except to say that this Nativity scene has nothing to do with acknowledging the past...

Perhaps it is good for firewood, or as a novel door-stopper...