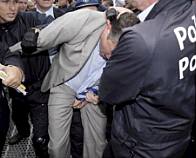 At a press conference in the European Parliament yesterday evening foreign journalists openly doubted the statement by Philip Claeys and Koen Dillen, two members of the European Parliament for the Vlaams Belang party (VB), that the Brussels police had told the VB that they would tolerate yesterday’s anti-Islamization demonstration if it was a peaceful “static” protest at Schuman Plaza. Despite this agreement, the police beat up the peaceful demonstrators in front of the European Commission building. “You can tell us whatever you want, but we need proof,” one of the foreign journalists told Claeys and Dillen.

The proof was given yesterday on Flemish television when reporter Goedele Devroy told a colleague [video here, in Dutch] that she was amazed by the brutality of the police against the peaceful demonstrators “who just stood there.” She added: “This is strange because, when I rang the police this morning, they said that they would tolerate the demonstration if the demonstrators would not use violence and if they just remained put and would not try to march.”

It looks like a deliberate trap was set up for the demonstrators, who were gathered at Schuman Plaza. Riot police units from Liege in Wallonia, the French-speaking part of Belgium, maltreated the demonstrators, many of them from Flanders, the Dutch-speaking part of Belgium, in an excessively violent way, picking out the VB leaders for the worst treatment. This picture shows how Frank Vanhecke, the VB party leader and a member of the European Parliament, was held tight by police officers while one of them pinches him in the balls. As they did so they shouted abuse such as “Sale Flamingant” (Dirty Flemish-secessionist).

Vanhecke’s hands were tied behind his back, as our video shootage shows, and he was shoved into a police bus. There the beatings continued. Yesterday evening, after releasing the VB leader, the Brussels authorities announced that they will press charges against Vanhecke for assaulting the driver of the police bus.

Filip Dewinter, the group leader of the VB in the Flemish Regional Parliament, was also beaten up. The police dragged him away as he was talking to journalists, a few yards from the demonstration. Last Monday, Dewinter, a member of the Flemish Parliament, called upon that institution to declare the independence of Flanders from Wallonia. Also beaten up, probably for the same reason, was Luk Van Nieuwenhuysen, another VB politician and a Deputy Speaker of the Flemish Parliament. Mr Van Nieuwenhuysen escaped from the beatings in the police bus by pulling open the emergency exit and fleeing.

The Walloon officers also maltreated Mario Borghezio, an Italian member of the European Parliament. The Italian government has formally complained to the Belgian government about his arrest, protesting against the violation of his parliamentary immunity by the Belgians. Franco Frattini, the (Italian) European Commissioner for Justice, Freedom and Security, is angry, too. He told the Belgian authorities demonstrations should only be banned when they are violent or glorify Nazism.

Yesterday, the Neo Nazis, which the Brussels authorities had said were coming to Brussels to join the anti-Islamization demonstration, were nowhere to be seen. This is hardly surprising. For Neo Nazis the Jews, not the Muslims, are the enemy.

This is the sort of thing that happens when the citizens of a country are not armed, and what happens in Europe often. The state does not fear its citizens, and does not have any respect for them. I would like to see this type of thing happen here in the US. Heads would roll, literally and figuratively.

I think that had this happen in America, the demonstration would have turned out bloody and more violent. People would have been killed and there probably would have been rioting on the streets for days.

We are a violent lot.

If french dont take care they will be "découillus" by you know who.

If you want to be legalistic (namely ignoring the fact that the police had indicated that they would approve people gathering provided everyone stayed calm), I can be legalistic too:  at no point were Van Hecke or Dewinter "demonstrating".  They were not waving flags, holding up signs or chanting slogans.  They were just there giving interviews. The demonstration was forbidden, yes, but being there, or gathering was not forbidden.  I don't recall that there was a "samenscholingsverbod" (order not to gather).  But in Dutch we have a saying: if you want to hit a dog, a stick is readily found...

Also, what about the guy pushing a person back because he is "Flemish" ("you are Flemish too so step back")?  Can you imagine a cop saying: "you are black too so step back"?  The newspapers would be too small to print all the indignation (and justly so).  But here in Belgium? Pfff...

Hopefully these pictures travel around the world and put the Belgian nazi regime to shame.

There is always a stick to beat a dog.
I remember when your buddies of the AEL were hitting the floor that the VB claimed high and loud for "zero tolerance" and I don't mention the bird names they gave to the police and the politicians.
But when it's their turn they suddenly are striked by a sort of amnesia.... of course !

It was just yesterday that I read on a french language newspaper website (either belgian, french or perhaps swiss) that the word "couillu" was now an accepted french word.

Do you think "le Petit Larousse" will use this picture to illustrate that word in its next edition ?

We should all be thankful that the BBC didn't cover the Brussels event if their 'childish'but less than innocent depiction of the causes of 9/11 are anything to go by.

Democracy?
Where?
Europe already atained the point were people may lost jobs or go to jail for their opinion.

- Brussels is a bilingual entity and it is more than normal that there are policemen from both tongues. The trick is that flemish extremists are trying to blame the french community (or the socialists) and that's what I meant with the scratched disc.

Thanks for the compliment.

This stands in totalitarian regimes, not in a democracy.

Ever hear of civil disobedience?

"There comes a time when forbearance ceases to be a virtue". - Edmund Burke

Not all people are sheep.

You certainly would have made a very good Nazi (or Soviet for that matter).  Your logic: well, the government banned any demonstrations by these groups.  They know the law.  Case closed.

"Walloon" police to beat up Flemish demonstrators. On the videos I didn't hear a single word of walloon talking.

The demonstration was forbidden and they knew it. Coming up now with the argument that they got verbal authorization from the police "if they stayed cool" is again a lie because the police can't overrule a mayor's decision.

The behaviour of the manifestants and their declarations are simply disgusting. How can guys like Van Heck and De Winter pretend to be able to rule a region if they don't obey to laws they voted for. The image of a twisting Van Heck on the ground was highly laughable because once the camera turned away, twisting ended suddenly.

Schaveiger,
The police in the video used Dutch and French interchangeably. Gates of Vienna http://gatesofvienna.blogspot.com/ posted a quick review I made of the audio yesterday. At least some of the officers in the video are clearly French-speaking, judging by their accent when they speak Dutch. And I believe it is telling that mainstream newspapers also report that officers were 'imported" from Liege to carry out the assaults - and nobody will ever accuse a Liegeois of being Flemish. A socialist Brownshirt maybe, but not a Fleming!

Nazism (and fascism) and comunism are alike and almost the same.

After WWII Comunist Party of USSR demonized Nazism (not very dificult) and fascism in order to demonize as fascists all those who oppose them.

Remember that Comunist crimes in USSR were as bad as Nazism. The ideologies that brought the worse massacres of XXTH Century were all, comunism fascism maoism, socialists.

Franco Frattini: "demonstrations should only be banned when they are violent or glorify Nazism"

No, demonstrations should only be banned when they are violent, period.  As someone quoted on a related post, freedom of speech is meaningless when you are only free to speak inoffensively.

And why is Nazism so unique?  I personally find Communism to be equally offensive yet no one threatens to ban demonstrations glorifying communism.

The title shuld be:

Capital of the EUSSR 2: Wallon Police Grabs Flemings by the Balls

Where is that nullity some calls belgian king?

As a journalist, do you think there is any chance that this story can be made big worldwide? Or will it disappear in the archives of a few blogs? It should appeal to Americans: "Belgian authorities crack down on peaceful 9/11 commemoration by European MP's"...