Belgian police is protecting a 17th century pulpit in the Flemish town of Dendermonde. The pulpit in the Catholic church of Our Lady dates from 1685, two years after the battle of Vienna when the Christian armies of the Polish King John III Sobieski defeated the Turks poised to overrun Europe. The sculpted wooden pulpit, made by Mattheus van Beveren, depicts a man subdued by angels and represents the triumph of Christianity over Islam. The man is generally thought to be Mohammed. He is holding a book which is generally assumed to be the Koran.

Two years ago, on April 16, 2006, during the height of the Danish cartoon affair, this website published a photo of the pulpit to show that there is a long tradition of depicting Mohammed in European iconography. Last Friday the Turkish newspaper Yeniçag reprinted our picture on its front page with the caption “Stop this hideous insult.” Yeniçag demands that Belgium remove the pulpit. The paper writes that “We have had the crusades and now they are still trying to humiliate us. This is as bad as the Danish cartoons and Geert Wilders’s Fitna movie in the Netherlands. Even Pope Benedict does nothing to stop these humiliations.”

Since Friday, we have received threats while the authorities in Belgium, which has a large population of Turkish immigrants, fear that the pulpit and the church may be attacked. The Belgian press reported today that the police is guarding Dendermonde’s Our Lady church to prevent vandalism to church and pulpit. 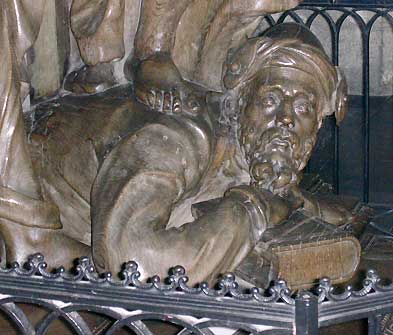 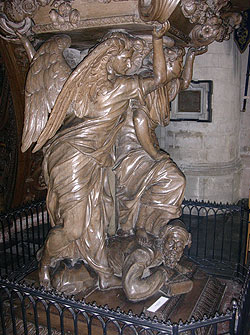 Dendermonde, a town in Flanders, the Dutch-speaking part of Belgium, lies halfway between Brussels and Ghent. It is the birthplace of the famous American missionary Peter John (Pieter Jan) De Smet (1801-1873), the head of the Jesuit missions among the Indians of the Northwestern USA and a friend of Sitting Bull, Kit Carson and other heroes of the 19th century American West. On his return trips to his Flemish home town, Father De Smet used to preach from the pulpit which is currently under police protection.

According to the Belgian press the pulpit controversy has been deliberately caused by this website, which is being described as “pretending to be neo-conservative” but run by “neo-fascists.” Piet Buyse, the mayor of Dendermonde, told the media that he deplores that the pulpit “figures on websites which aim to provoke negative reactions from Muslims.” The mayor said that the depicted man represents an unbeliever and may also be Luther or Calvin.

Aimé Stroobants, the custodian of Our Lady in Dendermonde, told the newspaper De Standaard that the figure on the pulpit “cannot possibly be Mohammed” because “He is wearing a Persian dress, while we know that the Prophet came from the Arab Peninsula. For all we know the depicted man might even be a Jew.”

Meanwhile, radical Muslims in Italy are still demanding the destruction of an early Renaissance fresco in Bologna's Church of San Petronio, painted by Giovanni da Modena in 1415. The fresco depicts Mohammed being tortured in Hell. 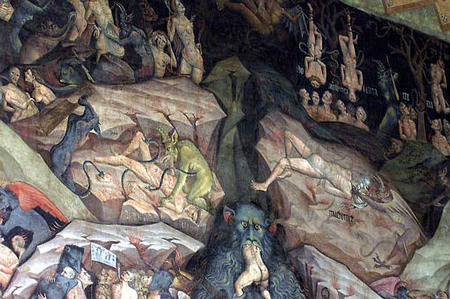 Revisionism by Islam is going apace. "We've had the Crusades", is rich! At the time the Turks were still on the Asian steppes. Turkey (Asia Minor) was the domain of the Byzantine Empire. It was the Greeks who bore the brunt of the Crusades, not the Turks! So much for pomo education ...
Cassandra http://newcitizenship.blogspot.com/

Being labelled a facist (though one of the very rare indeed nonviolent species) proves solely one thing: the accuracy and appropriateness of the argument put forth.

In order to see some feral old-school ones, I suggest a visit to your local mosque.

"This combination of national pride, rightist politics, language purity and racially tinged opposition to big-city mores and immigration is a classic formula these days in modern Europe, a kind of nonviolent fascism."

So, let's see... no "combining" national pride, rightist politics, wanting to speak and hear own language in own homeland, and no opposition to big city mores and immigration (because it may look racially "tinged") . Or else - you're a fascist, of the nonviolent kind.

The only fascists I see are the Muslims. Having read the Quran and parts of the Hadith, the "religion of peace" is a political and religious fascists ideology. The Muslims who threaten attacks, riot, murder, and/or engage in other acts of violence are actually the good Muslims for they are more "alike" in nature to their false "prophet" Mohammad, i.e. a barbarian and violent thug who raided many a caravans and killed all those he could get his hands on on the Arabian peninsula who would not bow down and submit to the false crescent moon god "Allah".

Being that Islam is a "religion of peace" (rolling my eyes) I don't need to FEAR exercising my free speech rights making my thoughts about Islam known. Islam is such a Tooooooooolerant "religion"! Right Mr. Rushdie? Right Mr. Van Gogh? Right Danish people? Oh and all the victims of the violent "YOUTHS" who rioted in Europe setting hundreds if not thousands of cars ablaze, i.e. in France for example? The press bent over backwards to hide the fact they were MUSLIM "Youths"....more like Islamic Fascists Hooligans.

Europe you need to rid your lands of Islam. It is a cancer. It will kill you unless you deal with it first, i.e, serious chemo which destroys the malignancy.

So predictable -- both the adherents of The Religion of Peace™ and the fascist-calling journalists. For the latter, the "fascists" somehow never seems fit for that supposedly "small minority" which is giving Islam bad name by threatening or resorting to violence.