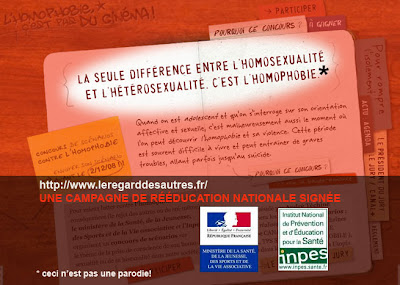 This poster from the French government is aimed at reassuring young people who are "discovering" themselves that there is no difference between homosexuality and heterosexuality. It reads:

The only difference between homosexuality and heterosexuality is homophobia.

When you are an adolescent and wondering about your emotional and sexual orientation, you may unfortunately also discover homophobia and its violence. This period in your life is often difficult to endure and can lead to serious problems, sometimes even suicide.

A national re-education campaign signed by: The Ministry of Health, Youth, Sports and Related Associations; and the National Institute of Health.

Question: Does it help to warn them that they may be headed for suicide?

Suicide is associated with surival and homosexuality with reproduction. Your "understanding" is grievously flawed. Neither is intended as a show of opposition to reproduction. The homosexual community is adamant that homosexuality is an innate sexuality rather than a lifestyle choice. Where it a choice, than homosexuals would prove far more courageous than almost any other counter-cultural group, be it interracial couples or political dissidents. Nor is there mention of deliberate lifestyle choices that exclude reproduction, such as "double-income-no-kids" couples, Catholic clerics, etc.

I do not understand the panic. Homosexuality and Suicide are one and the same the way understood today by the politically correct. It is refusing procreation by elimination of potential parents. Either irrevocably through suicide, or through homosexuality, which disorder however can be healed. The disorder can best be compared in cause & effect to substance abuse, and the same methods used to heal a substance addict work to heal a homosexual. See http://www.catholiceducation.org/articles/homosexuality/ho0011.html

I.  Human sexuality is incredibly complicated. It transcends pleasure-seeking or reproduction. One requires others to validate one's sexuality, given that sex invariably necessitates others' involvement. This validation is sought not only from partners and potential partners, but from society as a whole. Unfortunately, validation in this context is subject to groupthink, which produces ideals that may not be either conducive to validation or even realistic. Neither heterosexuals, homosexuals, bisexuals nor trans-sexuals are monolithic groups, yet each suffers due to groupthink from within and without.

II.  Dismissing the argument that homosexuality is environmental rather than innate, one can assume that it begins to manifest itself at the onset of puberty. Given that this time is incredibly formative for sexual development, teenagers are the ideal audience.

III.  Emphasizing homophobia at the expense of other negative groupthink currents is a mistake. The dynamics within the hetero- and homosexual "communities" require equal attention.

IV.  Were Western governments to acknowledge that a statistically significant proportion of non-Whites are targeting Whites for sexual and/or marriage partners based solely on racialist criteria...Is seizing territory, wealth and people not the definition of conquest? Is non-White immigration to White countries not conquest by any other name?

I think the theory that there are two kinds of people, homo and hetero, is an invention of leftist quacks who pretend they know something about psychology.

"Question: Does it help to warn them that they may be headed for suicide?"

The main slogan of the campaign (the only difference between homosexuality and heterosexuality is homophobia) shows the aim is to blame white society, not to help anyone. That campaign is more likely to increase than decrease the number of suicides, since it will encourage normal young people to behave abnormally.
This is typical behavior from the far left. They also have a theory that condom dispensers should be placed in every school as prevention against sexual diseases (as if school was the right place for sex). In fact, they put pressure on young teenagers to have sex, and it can only result in higher rates of sexual diseases. The leftists are only interested in posturing, they do not care about anyone.

"When you are an adolescent and wondering about your emotional and sexual orientation, you may unfortunately also discover homophobia and its violence."

What kind of violence? How many teenagers have been beaten up "because they were gay"? If the french "Ministry of Health and Youth" wants to help teenagers, it should publish the stats about immigrant crime and disease infection. It would save the lives of many naive young people.

Your comments are chilling: it is not inconceivable that the official records of, say, Sweden or Norway could be used against gay people in the future by an Islamist government or a coalition government that includes an Islamist party. These governments keep records not only of gay couples who marry but also of gay people who officially reside together.

Is this a plot by the French government to enable the islamist once they take over France to more easily know who is gay and thus eliminate the gays of France more easily? I know the EU and French elite want to show the islamist that they are on the islamist side but this may be going a bit too far.

Recent online suicides in UK, Florida, and Missouri should cause editors and copyists to use more care in their publications ... especially where youth are involved.