Two French websites – Islamisation, administered by Joachim Véliocas, and Bivouac-Id – have posted reports on the laying of the first stone of the new Grand Mosque of Tours. Notable among the dignitaries present were the Algerian Minister of Religion, the Socialist mayor of Tours, Jean Germain, and… the archbishop of Tours, Monsignor Aubertin.

Tours will have its Grand Mosque when the 5 million euros necessary for its financing have been found – in 3 years, at the earliest. A quarter of the sum has already been collected. The land was purchased by the Paris Mosque, subsidized by Algeria. On November 29, 2008, amidst great ceremony, the first stone was laid. In 732, a Muslim army was defeated outside the city of Tours by Charles Martel and the Franks. The Battle of Tours was one of the most decisive battles in history since it stopped the Islamization of Europe (at least for 13 centuries). Adolf Hitler bitterly regretted that the Muslims had not won in Tours.

The Algerian Minister of Religion, Bouabdallah Ghlamallah made a stopover in Tours to attend the laying of the first stone of the Grand Mosque of Tours, before taking off for Saudi Arabia... a land where the practice of Christianity is forbidden, as in Algeria where spreading it is punishable by heavy fines and prison sentences! But Algeria will contribute up to 490,000 euros towards financing the mosque. 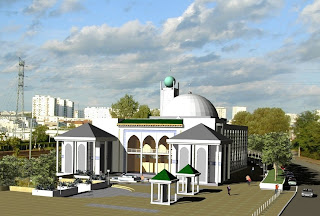 Bouabdallah Ghlamallah distinguished himself earlier in the year through his sense of inter-religious dialogue, so dear to the hearts of French bishops. He closed 10 churches, justifying his actions by saying: “I associate evangelization with terrorism.”

On June 24, 2004, Bouabdallah Ghlamallah denounced the evangelization of Kabyles (Berbers) in Algeria during a press conference in Algiers. He repeated that Islam was the “religion of the State and of all Algerians”, then warned that preaching Christianity would result inevitably in a confrontation: “There will be bloodshed.”

The organization SITA is actively protesting the building of this mosque. SITA (Stop Islamization and Terrorist Actions) has been instrumental in raising awareness of the Islamic threat and in helping to stop the funding or building of many mosques in France. French readers can consult this long web page devoted to SITA’s actions against mosques. In its summary of mosques SITA issues this warning: "Each mosque is a parcel of France given and even offered to our worst enemy (...) Each mosque is a wart or a cancer on our beautiful land of France. Let us not forget that the "mosque is not essential in Islam."

How many mosques are there in France?:

1700 places of worship reported by the CFCM (French Council on the Muslim Faith) in 2004.

1500 places of worship including 400 mosques according to another source at the Ministry of the Interior.

Sorry, this is off-topic comment. TBJ should NOT miss this story: Klaus vs Eurocrats

Islam is an implacable enemy of the West. It has been so from its beginning and will always be so unless the Koran is rewritten or revised with a new testament from a new prophet, but blood thirsty Muslim mobs will not allow this to happen. The more you bend to accommodate Muslims the more they will press forward to dominate. Europe is nearing the point of no return. Every third baby born in France today is a Muslim child. I fear that I will live long enough to see Muslims cleanse the Louvre of Christian art and history.

I.  Should the British be suspicious of the French because of Waterloo or Trafalgar? Or of Germans because of Ypres, Dunkirk, et al? Should Protestants remain bitter over Magdeburg? The advance of Islam in Europe should be considered from its current impact and future potential. This is not to say that in a decade, century or even a millennium Muslims will be on friendly terms with non-Muslims and peacefully co-exist with them. However, it is to say that the situation is dire and requires direct action, not treatises attempting to prove that the Muslims have always been the enemy, like the Hun, Frank, etc.

II.  Hitler's opinions cannot be counted upon to determine a rational and lucid worldview, anymore than Obama's or Joel Olsteen's.

III.  After all the men, materiel and money that poured into Algeria during the country's bid for independence, it is pleasing to see Algeria finally cough up some cash to its former master.

IV.  Given that the Berbers were forcibly converted to Islam and subject to Arab dominion, it is no surprise that they are receptive to Christianity. At the same time, Algeria is unlikely to allow the Berbers to "culturally secede" any further, given their predilection for separate statehood.