The Front National of Jean-Marie Le Pen is rapidly disintegrating. Within the space of a few weeks there have been numerous defections among those who held important posts both within the national party and in certain regional branches. It does not bode well for the future of the party, nor does it promise any real hope for Marine Le Pen. She is Jean-Marie’s daughter and he wants her to be his successor. 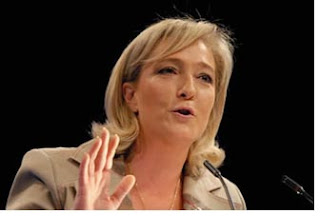 <!---->
Riposte Laïque has an interesting article on this week’s “spectacular” break, as they call it, between Marxist philosopher and social critic Alain Soral, and Marine Le Pen who had supported his controversial entry into the Front National two years ago.

On Feb. 2, Soral announced at his blog that he will be leaving the Front National, two years after joining it. His words betray a huge disappointment with regard to Marine Le Pen. Alain Soral is a former member of the Communist Party. He is also close to the anti-Semitic “comedian” Dieudonné M’Bala M’Bala. On an international level, he believes that the world is riddled with Zionist influences, an obsession with him, and so he does not hesitate to show indulgence for Hezbollah and Hamas.

Taking as a basic principle that the Front National was the only real opposition party, he decided to join and to introduce into the party a point of view oriented towards labour and those excluded from the system. Marine Le Pen seemed to be his main supporter on this new thinking. The speech at Valmy, delivered by Jean-Marie Le Pen, and written by Soral, to launch Le Pen’s 2007 presidential campaign, was an ideological rupture with the historical FN. This speech dates from September 2006. In it Le Pen insisted he adhered to the values of the Republic, but also to the monarchical system of centralization which he saw as the source of republican jacobinism. He claimed that he encompassed everything, from the Capetian monarchy to Napoleon, to the Resistance. A good deal of the speech sounds like a rallying cry of Socialism to the “common man” to rebel against a “foreign” “Atlantist” influence.

Thinking that the “excluded classes” (i.e., the immigrants) and the working classes, disgusted by the two Establishment parties, would turn to the Front National, Alain Soral and Marine Le Pen ran a campaign that turned off a number of party members. They persuaded Jean-Marie Le Pen to visit the immigrant neighbourhoods. His short visit to Argenteuil became notorious. Le Pen told his young immigrant listeners that they were as French as anybody else, a position diametrically opposed to what the party traditionalists expected from its leader.

The catastrophic results of the presidential election weakened the bond between Soral and Marine Le Pen, although she still seemed poised to succeed her father, and Soral still sought to exert an influence over her. This went against the wishes of the traditionalists in the party, who responded by defecting. These “trads” are usually staunchly Catholic, interested in maintaining the old regional identities of France, and definitely opposed to assimilating the newer ethnic communities of blacks and Maghrebins, which would require both affirmative action and “métissage”.

Does this departure of Soral signal the end of the new orientation of the FN, instigated by Soral, the former Communist? We don’t know yet. French readers who are interested will find an incredibly long web page of commentary at Le Salon Beige on the departure of Alain Soral from the Front National. The fact that Soral was passed over as the FN candidate from Ile-de-France in the upcoming EU elections is realistically posited by some as the real reason why he left the party. And for French readers interested in Soral's own justification of his departure, click here. He accuses Marine of not letting him do anything for two years, of being unsure of herself, of surrounding herself with “courtisans and imbeciles”.

The departure of Soral are not Marine Le Pen’s only worries. National-Hebdo wrote on January 27:

The assemblage, patiently built and maintained by Jean-Marie Le Pen, of diverse elements of the National Right today is bursting apart. Nothing spectacular, not a massive departure, just a slow disintegration of the apparatus. After the departures on Friday [January 23] (...), today Martine Lehideux, a founding member of the FN and Martial Bild, a member since 1980, who holds several important posts within the FN, are breaking away from the ideological trend initiated by Marine Le Pen. (...) In less than three months the FN has lost one fifth of its regional councillors, three European deputies and nothing indicates for now that this hemorrhage is coming to an end.

Most of the elected officials who left the FN have followed Carl Lang, a member of the European Parliament, who left last November to run in opposition to Marine Le Pen in the upcoming European Parliamentary elections scheduled for June 2009. Many of these officials could be seen on 25 January in the huge pro-life demonstration in Paris, side by side with Carl Lang. The abortion issue has been one of several ethical questions that separated Jean-Marie and Marine Le Pen from many of his traditional Catholic constituents. The Le Pens have shown themselves to be more “liberal” on issues of abortion and euthanasia than the Catholics had hoped.

How is the MPF doing currently? Will they make a combined list with Libertas for the upcoming European elections?