Here is a text from the pen of René Servoise, former ambassador of France to Indonesia. It is posted at Bivouac-Id, Le Post and Terre d'Israel. Despite its length, I chose to abridge it only slightly.

A mutation of our nation is in progress. It is growing, it is profound but uncontrolled. In all likelihood, the immense majority of Frenchmen are unaware of it.

Hundreds of thousands of Muslim families, from North Africa, the Middle East and black Africa - whose religion, aspirations and mores are radically different from ours - now live on our soil. Their birth rate is higher than that of European families. What is the consequence? Within 30 years the population of Islamist culture could be in the majority among those 40 years old or younger. "In France, we will have between 6 and 8 million Arabs by the years 2005 - 2010," said Edgar Pisani, honorary president of the Arab World Institute. We have been duly warned: this is a radical transformation (political, economic, cultural and social) of our society.

This mutation is in progress at the very moment when, to use Toynbee's expression, "an external proletariat" is forming on the southern and western shores of the Mediterranean Sea. This army of reservists came about as a result of the birth rate of these peoples, and the absence of an economic policy capable of guaranteeing them a decent life in their homeland. In front of them lie France, Italy, Spain and Germany, lands of mirage, highly developed, with guaranteed employment, free social protection and education. Who could resist the call of this "promised land"?

At the same time, all over the world, roused by immense hopes, Islam is enjoying an unprecedented revival. It is awakening after a long night. It has renewed vigor, pugnacity and ambitions. From Morocco to Indonesia, from the Muslim States of Central Asia to black Africa, more than one billion two hundred million men - young compared to the aging populations of Europe - constitute a "community" (Umma).

It is transnational, motivated by spiritual aspirations, material demands and political ambitions, and (here and there) financed by revenue from oil.

In France, the successive waves of Italians, Poles, central European Jews, Spaniards and Portuguese, had never posed comparable problems of integration. Why? Because they belonged to the European branch. Their religious traditions and their ambition to acquire more individual freedoms facilitated their assimilation. Finally - and this is far from the least important reason - these immigrants expressed a desire to share the destiny of the French nation. To meld into it. Integration cannot be decreed. In order for it to materialize it must be desired by two, this is obvious. And the two must converge. Today, the situation is different, radically different. An active and determined minority among the Islamists refuses integration. Deliberately.

In close communion with Islam (its matrix), it is receptive to orders from abroad, to spiritual counsel, ideology and financial support. And much more. Not only does it intend to keep its identity, but to re-Islamize the non-practicing, if not convert the natives of the host country to the true faith. Islam has never conceived of itself as a minority in a secular State, but necessarily as the majority religion. (...) Exalted by its renewal, propelled both by its demography and its absence of economic development, infiltrating wherever there is no resistance, Islam is advancing like a wave.

The French people can measure its vitality by the number of mosques multiplying on their territory (sometimes with the help of Catholic and lay leaders), mosques run by imams 96% of whom are from foreign countries. Also by the prospect of seeing - in the second half of the 21st century - the fall of Catholicism in France to second rank, leaving first place to Islam.

Thus two dynamics are developing: one inside our borders (...); the other outside (...) Concomitant and convergent, these changes are determining factors for Europe and for the French nation where the demographic stagnation is alarming.

The map below shows the growth of mosques, with the dark green areas indicating more than 30 mosques. The years range from 1985 to 2008. Their growth is amazing.

Every nation expresses itself through a subtle, delicate and secret balance between dreams, ambitions and strengths, sometimes contradictory, transcended by a common aspiration to live together and to do great things together. This national identity is for some its soul; for others its genius. Each nation is a plant nourished by a land and a History, pride in its past. "Immediate to the heart of God," it is unique and therefore justified.

How many centuries, wars, concessions, sacrifices and omissions were necessary for France, England, Spain and Germany to overcome - finally - their internal divisions and to become what they are!

If it is fitting - as Montesquieu recommends - to only touch institutions with a trembling hand, what can one say about the respect due the profound harmony of our nation, its internal composition - the measure of its permanence and of its performance?

To the lessons drawn from our past, the present adds new warnings about the future on a daily basis. How can we allow ourselves to be blinded to the point of not seeing the proliferation and the exasperation of ethnic and religious conflicts all around us, since the same causes produce the same effects?

He then lists some of the numerous ethnic conflicts in the world, including those in Asia, Africa and Europe.

Are we Frenchmen, after having overcome so many rebellions, insurrections and revolutions, after having liquidated our quarrels between Catholics, Protestants, Israelites and Free Thinkers; between nobles, bourgeois and proletariat, about to allow conditions that foster disintegration to take hold?

Warning. If native Frenchmen fail to be the most numerous, we will see that our days are numbered. If we fail to limit the number of immigrants, we will be judged as wanting in the scales of History. If we fail to affirm our national ambition, we will set the stage for the bursting apart of our nation.

Remember. One day, in Babylon, on the wall of his palace, Belshazzar saw letters written in fire, three warnings: MENE MENE, TEKEL, PARSIN. The prophet Daniel translated them thus:

"God has numbered the days of your kingdom and brought it to an end."

"You have been weighed on the scales and found wanting."

"Your kingdom is divided and given to the Medes and the Persians."

For us today the warnings come daily on our TV screens. But no prophet dares translate them.

What kind of France, dear reader, do you hope to bequeath to your children? 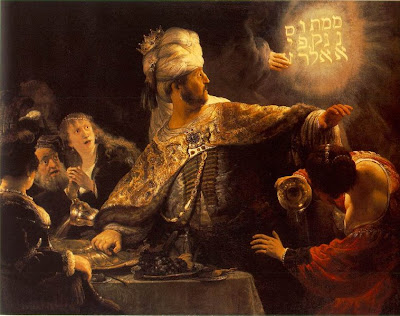 But Brazil? Somehow I can't see that little 'lulu', President Luiz Inacio da Silva, taking too kindly to a mass influx of "white-skinned, blue-eyed" latterday Gordon Geckos, only to become a potential disruptive influence in his multi-culti leftist paradise.

The only way the situation in Europe could be salvaged or reversed would be if the Muslim elites there were to discover the Enlightenment and begin seriously to critique the deeply serious problems inherent to Islam.  But that is not merely unlikely; it is inconceivable.  The reason that the influx of Muslim immigrants to Europe is such an unmitigated disaster is that Islamic cultures do not engage in self-critique.  I only ask that the Europeans who have spent the past seventy years badmouthing America take refuge in Canada or Australia or Brazil or anywhere but the United States.

The Europeans used to be great fighters. The Franks and Saxons were warlike immigrants who seized land and ruled and blended with the natives. Now they are ruled by decadent "Romans" who merely manage and do not lead their peoples, indeed deny that their peoples even exist except as administrative subdivisions. It is never too late for people to arm and organize in self-defense. But the probability is that current trends will continue, and poverty and violence will continue to spread, before a significant resistance movement appears. It probably is too late for the current political structures in most Western countries (though Austria and Switzerland show signs of life), but it will not be too late for the peoples themselves until they are dispersed and/or enslaved. As the Geats foresee for themselves after Beowulf's death.

The beat goes on, and on. Although it is tantalyzing to read the perspectives of another, we must remember one solemn thing:

Mark Steyn's admonitions ring no less, nor no more loudly, when heard from another with similar thoughts. How easy to state the obvious, It will be in predicting the day of "deliverance" that will bring to us the greatest of our current fears.

The dike may yet be saved from caving inward, but poor little Peter could use a few more fingers to assist in the effort.

Amazingly clear message. Monsieur Servoise's essay states a stark warning. It is frightening times for those who do not wish to "submit". . .

Sadly, in Canada, such an essay will land the unfortunate writer in the living hell of the Canadian Human Rights Commission!