On Friday November 14 Novopress had warned of possible violence if Algeria lost a soccer match against Egypt. Algeria did lose on Saturday night and, as predicted, Algerian immigrants in France turned violent. The following very short video shows a scene of a boat burning in the port of Marseilles.

The next video, 2 minutes long, shows the Algerian mob in Marseilles, followed by similar shots of the burning boat.

The next video is similar to the preceding one:

There were riots by Algerians elsewhere in France, including the ghetto of Barbès in Paris.

Rioting also took place in downtown Paris on Saturday. This incident had nothing to do with the Algerian event but was the result of a publicity stunt by a commercial company. It seems that an organization called Mailorama was set to distribute
40,000 euros to whomever... It seems to have been a publicity gimmick
that has been tried before in other countries, including the U.S.

At
any rate, Mailorama cancelled its money distribution, and as so often
happens nowadays when there are crowds in Paris, all hell broke loose.

Le Conservateur has a post entitled (in English) "Tourists Beware. Don't visit Paris, you're not safe anymore." There is only one photo, no text, but it is sufficient to convey the image of violence that occurred Saturday in Paris near the Eiffel Tower and in front of the Ecole Militaire, France's once proud military academy. 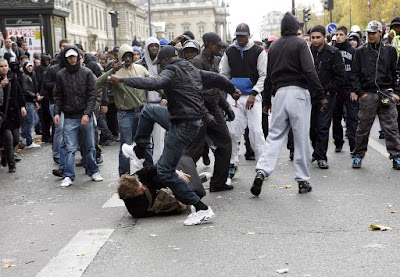 The violence rapidly escalated, with mostly black thugs beating up whites, at least as far as the photos tell us. Here is the brief report from Novopress. Please consult the French blog François Desouche, even if you don't know French. The photos and videos will give you some idea of the violence:

The event turned into a riot. Store fronts were smashed and cars damaged near the Ecole
Militaire, where there were large crowds. According to a visitor to the website TF1 News, some rioters first used oranges to throw at passers-by or at the people who had come in the hopes of getting a few euros. Then they progressed to more serious methods - obviously premeditated, since we can distinctly see weapons in the hands of certain rioters. One of them is even waving a machete! "The neighborhood was sacked", she told us. Passers-by were molested, a photographer beaten up. Around 2:15 p.m. calm was restored.

The narrator tells of the shops vandalized and the cars overturned, in particular a police car that was totally destroyed (you'll see it in the video). He says that when they realized there would be no free money they went wild. At the very end of the video we hear the famous words of Nicolas Sarkozy (I cannot verify that it is his voice) uttered during earlier riots in Paris, when he was still Interior Minister: "You've had enough? Well, we're going to get rid of this scum." This now almost-legendary pronouncement led many to think Sarkozy was a "tough cop". More than that, it permanently fixed his image in the world-wide media as being one of a "conservative" who fights crime and boldly confronts violent immigrants.

The following set of photos was published at a Belgian website. We see a white person being beaten (similar to photo at top), then the thugs throwing oranges, then a scene of disorder, and finally a person carrying a machete. 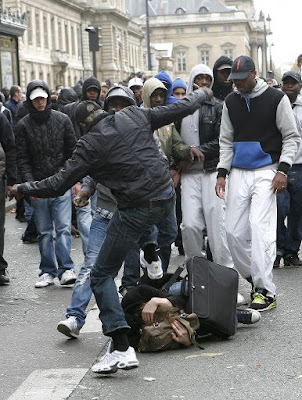 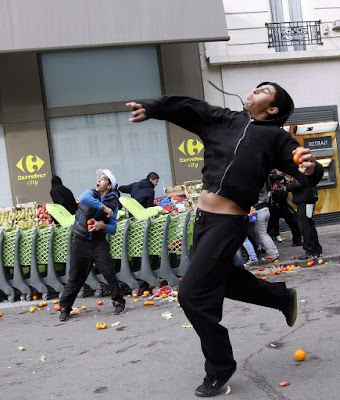 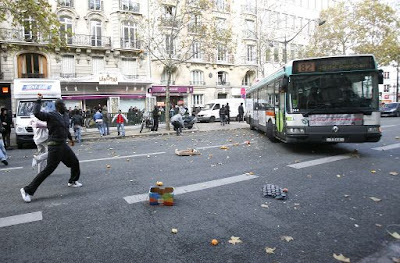 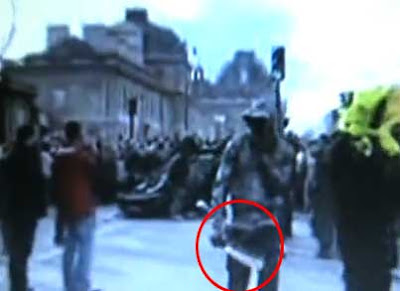 Why is this allowed to continue? This is not the first time something like this has happened, nor will it be the last. Do the French people not care any longer?

What would you do if there were packs of wild dogs besieging the city? Would you not round them all up and shoot them? Besides the fact that these walk on two feet rather than four, what is the difference? There is no question of rights involved here. There is no abuse that these people are responding to, but rather they are simply abusing the host country violently. Is it not time for the host to respond decisively?