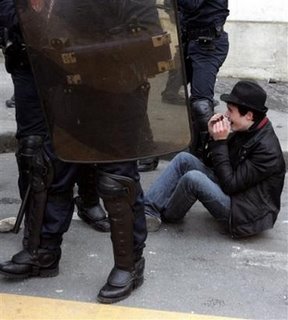 Today, leftist students in France continued their demonstrations against France’s new labor law. They do not want any “Anglo-Saxon” conditions. However, they do not know what they are talking about. This is a scene from earlier this week:

A student who attempted with numerous others to take over the College de France university, near the Sorbonne university in Paris, sits and cries on the street after clashes with riot policemen Monday, March 13, 2006. The French prime minister's vow to press on with a new labor law that has sent students into the streets drew fresh criticism Monday from unions and the opposition Socialists, who said President Jacques Chirac should intervene. The top two unions of high school students called for classroom protests starting Monday. (AP Photo/Michel Euler)

Let me get this straight. Total (%) unemployment in France for those 25 and under looks like this per Eurostat: 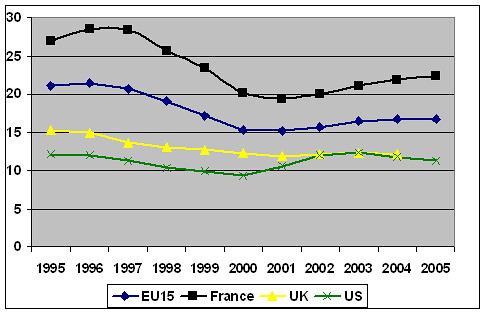 Our effete crioter depicted above does have some reason to take heart. At least he is not a French woman aged 25 or under and looking for a job: 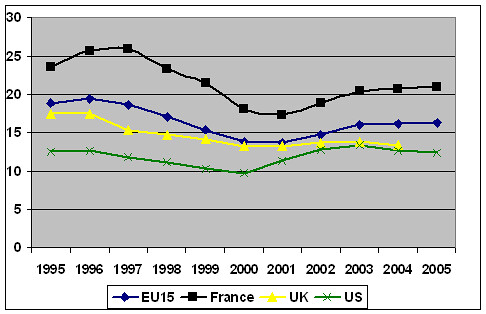 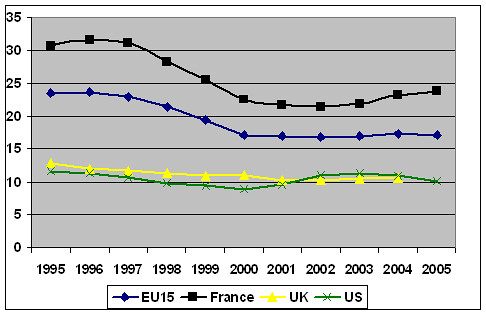 The laziness of these people amazes me. Here in the U.S. we also have a problem with many young people - my own generation - who don't like to work and have this feeling of entitlement, but at least they are easier to get rid off. I watched the protests on France 2 the other day and I just couldn't believe it. It is like they have no concept of the long-term crisis that they are right in the middle of now. They kept interviewing these students who would repeat the same mantra, "I can't buy a car or rent an apartment if this law passes, but then I might lose my job..." The whole concept of earning your way in life seems to be foreign to an entire generation.

Do you think he's crying because he found protesting to be too much work?

"I leave university at the end of the year and this law puts added pressure on me now."

"It means that when [I say if] I do get a job I will basically have to work as hard as I can to keep it."

"If I make any mistakes I could be fired immediately."

Being fired for making mistakes? Surely he should be rewarded?

"This will affect me severely, so I have taken to the streets."

Instead of trying to get a job!

I rant that muslims should work in the countries that they are residing in and Victor looks damn healthy to me. So I know it is not a glamorous position. I know that is not
as much fun as a rave until 5 am in the morning or some other delightful moment. But I believe that Ronald MacDonald can help him out quite superbly. A Royale with Cheese costs an arm and a leg there. Now with a milkshake and some fries with that mayonnaise that every red blooded american knows does not belong on them or a hamburger. If he applies himself, one day he might become a manager!
But I digress. The point is university is expensive be it for the country or the parents.
So Victor get your lazy bum down to public works!
Now there is MacDonald's, street sweeping, nothing wrong with a little honest sweat son! If he has a nose perhaps, he could use it for the note or a perfume or a wine ( preferably not the little white whine that he
truly is) and less of the nose for stuffing candy up!
But I think Victor's biggest problem is that his father and mother did not beat his little touche often enoiugh when he was little. I could be wrong? But I doubt it!

I have to say (being an ancient cynic and nihilist - see elsewhere) that I'm very impressed by many of the young people round here. In the evenings and at weekends a very high number of school and university students have part-time jobs - the supermarkets, shops and eateries are full of them. They are the bright and the beautiful, and they don't mind doing menial work to earn the extra pennies that will get them through college and achieve their long-term goals.

The French kids sound like they don't know what they're missing.

Interestingly the night staff at the local 24 hour Tescos are completely different. These seem to be either immigrants or middle-aged people who look as though they have fallen on hard times - divorce or similar - and quite a few have probably got day jobs as well.