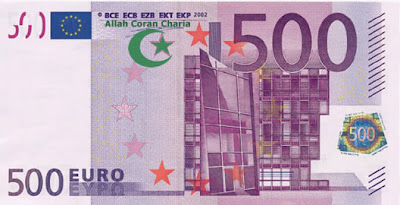 Some English-language Arabic news sources have covered this story. It is certainly not new - discussions about Islamic finance have been making headlines in the world of economics for a long time, but the French are inching closer to a definitive measure that will allow Islamic law to enter into the French legal framework. All this is happening with the support of President Sarkozy's UMP.

The French Senate passed the bill on June 9. It was then that they introduced the amendment on Islamic "sukuk" that was to become the source of the Socialist opposition in the Chamber of Deputies three days ago, when the final vote was taken. Without that amendment it is likely that the Socialist deputies would have voted for the bill.

Here is a report from Le Point, dated September 17, that was probably the source for the English-language articles. It should be noted that this story has been largely ignored by the French MSM. It appears primarily at Le Point, but I could not find anything in Le Figaro (although that may have changed by now):

Despite opposition protests from the Left, the French Parliament has passed a law that authorizes the issuing of Islamic bonds, known as “sukuk”.

The bill, introduced by UMP deputy Chantal Brunel, has as its main goal the facilitation of access to credit for small and medium-sized businesses. The deputies adopted the same text that the Senate had passed on June 9. Thus the wording of the bill has been definitively adopted by the Parliament. The UMP and Nouveau Centre parties voted for the bill, the Democratic and Republican Left (GDR), the Communist Party (PC) and the Green Party voted against it. The combined socialist parties, known collectively as the SRC, which includes the Socialist Party, the Radical Party and the Diverse Left, also voted against it.

The Socialists were highly critical of an amendment introduced by the Senate, and supported by the government, that proposes to modify the civil code to allow the issuance, from Paris, of financial tools that conform to the principles of Islamic finance.

“They are introducing Islamic law into the framework of the French legal system,” said Henri Emmanuelli, of the Socialist Party. “That shocks us deeply. It's unacceptable. It has become ‘anything goes’”.

Henri Emmanuelli has been an active Socialist since he joined the party in 1971.

Minister of Industry Christian Estrosi denied any willingness to adapt French law to religious rules. “It is out of the question to say that we are negating the principles of our law in order to conform to some religious or cultural principle. Conversely, I cannot see why we would refuse certain types of financing on those grounds,” he said.

The measure, which reforms the rules on fiduciary obligations will permit the issuance of “sukuk” in France.

Unlike classic obligations, the “sukuk” are backed by a tangible asset. They pay no interest; the investors receive coupons corresponding to a part of the profits earned by the underlying asset.

Those who are interested in economics, may want to read this Wikipedia article on "sukuk".

To this day, no European enterprise has issued any “sukuk”.

In France, the first issuing of an Islamic bond, originally set to take place before October, has been put off due to technical difficulties, announced Mohammed Farroukh Raza, of the Islamic Finance Advisory Assurance Services (IFAAS).

The following paragraph deals with the main provisions of the law - aid to small and medium-sized businesses in France:

The new law obligates banks and insurance companies to justify their disengagement if the enterprise requests it. The enterprise could also solicit from its banking agent explanations concerning the internal ratings of which it is the object. The law provides for the creation of a specific loan for small and medium-sized enterprises that have been in existence for two to five years. The loan would be guaranteed by OSEO, and includes several measures destined to alleviate the procedures to which small and medium-sized enterprises are subject. Among these is the abolition of the obligation on the part of single-person businesses to draw up management reports.

French readers can check out OSEO's website. It is a government agency that supports small and medium-sized businesses in France.

Those interested can consult the following English-language articles. The first two links are essentially the same:Futurespros.Arabian Business.Retail Obstacle (from Arabian Business).One of the first to react to the new law is Marine Le Pen, vice-president of the Front National, who denounces the Left for doing too little too late:

The same people who are today shouting loudly and clearly their adherence to the principle of laïcité in order to oppose the new law, have been encouraging for years, as have the followers of Sarkozy, all the communitarian excesses that are undermining the foundations of the French Republic. [...] The introduction into French law of the principles of Islamic finance has led the Socialist deputies to reject a bill on the financing of small and medium-sized enterprises that they had supported in the first vote last March,

Several blogs posted news of this new law. One (Belgian) reader at Bivouac-Id had this tale to tell:

Twenty years ago, I belonged to a brainstorming cell in a large Belgian bank. The Belgian government was already in bankruptcy at the time, and so, as usual, had requested a loan from the [German] BundesBank. The loan was refused, in view of the chronic insolvency of Belgium. If this information had been known, it would have meant the immediate free fall of the Belgian franc. We had fallen to the same level as Mexico or Brazil [...]

The information was kept ultra-confidential considering what was at stake. The banks, in a state of panic, were expecting the State to take out a obligatory loan (this is one where the banks are obligated to buy 80% of the shares, the remaining 20% being reserved for private fools who imagine they are making a good investment).

Two weeks later, to the relief of everyone, Prince Philippe [the Belgian Crown Prince] had made trips to the Arab countries and had returned with an Islamic loan! Belgium was saved by the skin of its teeth!

The Islamic loan, in accordance with the Koran, can be granted to infidels on one condition: they must strive to Islamize their population. No limits.

I remember feeling a cold sweat down my back when I heard the "good" news! And ever since, the Muslims have had complete power in this country, including the power to impose freely and with impunity the right to kill, rape, and pillage. Ever since, Brussels, the capital of Europe, has become a lawless city, and hyper dangerous for any white person.

We can't know for sure how accurate a comment from a reader is. But I found his story interesting enough to post as a potential reason for being suspicious of Islamic finance.

French readers who are really up on their economics may want to read this page from Reconquista. It is an explanation of the dangers of Islamic finance.

My initial post on Islamic finance goes back to March of this year, when it was announced that the Vatican approved of the introduction of sharia-compliant measures into the European financial systems.

The Netherlands Want to Become Centre of Sharia Banking, 17 July 2007

has a big hole in their budget, due to the banking crisis, which they couldn't cover yet. They are hoping to attract the finances this way from the Arabs. They won't succeed.

Why wouldn't the Arabs take a note on France just as the Chinese have taken a note on the U.S.A.? International peonage has a long history.

Because there are too many Jews in the French financial system. Until some years ago that was irrelevant, but today it certainly counts.
The Arab banks in France didn't get anywhere, they were not considered "acceptable". Today those banks have plenty of money and can be used by private people and companies. Sarkozy knows that but has not been able to seduce the Arab banks into lending the French state at "special" rates.
There are even big Arab banks who refuse to deal with the French state. The only big exception are the Qataris who have received enormous privileges.

Perhaps I crossed an inter-dimensional threshold by mistake; I must have, given that I agree with the PS rather than the UMP on "sukuk".

Sarkozy's commitment to laïcité is questionable.  However, he remains committed to Gaullist foreign policy and the grand strategy of re-establishing the French Empire in the form of an international bloc composed of Francophone African countries and the Arab League.  Indeed, France has even used the European Union and NATO to neutralize the power of its Western European rivals.  Will Germany ever exercise control in Brussels commensurate with her contributions to the EU?  Is the UK capable of foreign policy and military action independent of the US and NATO?

The Africanization and Islamification of France is the price of exerting influence beyond its borders and its current stature.  Sarkozy is willing to pay it, lest France succumb to the mediocrity it truly deserves.